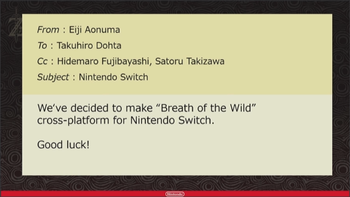 The start of a new generation of video game consoles is often an exciting time, as the new hardware offer a wealth of new possibilities for visuals, audio, and game design. However, in spite of these advancements, not everyone jumps on board with the new hardware right away, due to new consoles often being expensive or hard to find soon after they launch, or people simply being satisfied with the machines they already have. This puts game developers and publishers in the awkward position of wanting to take advantage of the new technology while keeping the still-large number of people using last-gen hardware in their potential audience. The solution to this is the Cross-Generation Game, a subtype of Multi-Platform video game that is developed and released simultaneously or near-simultaneously for last and next-gen hardware.

This is more controversial than one might think. Technophiles and early adopters of new hardware are often critical of this practice, as such games typically don't take full advantage of the technology offered by new consoles, with the next-gen versions being more akin to Polished Ports of last-gen titles as opposed to true next-generation games. Others appreciate not being forced to upgrade to new consoles immediately in order to play the latest games. Of course, no one likes this practice when it's done poorly, which can result either in the next-gen versions having little to no noticeable improvements over the last-gen versions, or the last gen version being a Porting Disaster due to the older consoles not being able to handle the game.

This doesn't really happen on PC games, due to both PCs lacking distinct generations for the most part, and because almost all PC games are designed to scale across hardware to a certain extent thanks to graphics settings. That said, game developers often take advantage of this scalability when creating crossgeneration console games, with the last-gen versions using the equivalent of the PC version's low settings, while the next-gen versions can take advantage of the higher settings.

Compare and contrast Moved to the Next Console, where a game shifts entirely over to new hardware without releasing on the previous generation. If a game has radically different versions on different generations, then it's a Reformulated Game instead. Goes hand in hand with the Daddy System trope, where an older console remains popular and supported even after its successor releases.

Rhythm Games Occurs a lot in this genre much like with sports games, due to its popularity with many casual video game fans who might not upgrade to new hardware quickly.

Sports Games This is the rule rather than the exception with sports games, due to the broad appeal of sports leading developers to seek a similarly broad audience for their games. Sports games typically continue to release on older consoles long after other genres of games abandon them, likely due to the large number of people who own consoles just to play sports games and are therefore likely to put off buying into the next generation as long as possible. As proof of this, look up a list of the last games released on various consoles; a good chunk of them are sports games.