"Thank you, Tempest...For giving me a new purpose in life...To learn about the outside world...And you."
— Zetsu 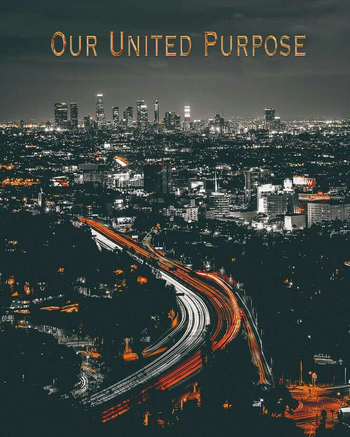 Within the Westfield Sector, things were business as usual. The mob was harassing the local populace, the vendors are selling their goods when they can, the police are getting pushed around and mocked for the useless bunch they are. It was average for the people there...Until some bizarre strangers begin to make themselves known. And in that process, all normality disappears...

on June 9th, 2018, Our United Purpose is the first holy original piece of fiction created by the likes of the writing duo of Fuzzboy and Delta Xtreme, who previously had created Fuzzy Memories. Taking some of the characters from there and some other works of theirs, the two have created an original and unique world for them, that focuses primarily on a developing story based around a select group of people, who have been forced in a situation they never could have expected. Within the coming months, the story was re-released on Fiction Press

The first volume is planned to release it's final chapter around mid-September, and a second volume has already been announced for an unspecified release date.