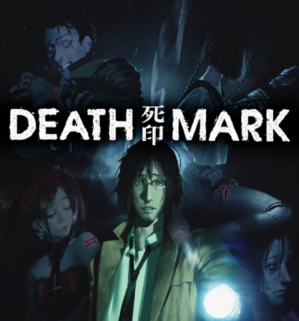 Death Mark (死印 Shiin); titled Spirit Hunter: Death Mark in the US, is a supernatural horror adventure game developed by Experience, Inc. on the Nintendo Switch, PlayStation 4, PlayStation Vita, Xbox One, and Steam. It is the first game in the Spirit Hunter series.

Set in H City of Tokyo, Death Mark revolves around people who bear the eponymous Mark, who are fated to die after having it for too long, and suffer memory loss in the meantime (which affects their ability to live normally). Marks are the doing of malevolent spirits, born of grudges and resentful of the living. And those who are Marked tend to meet impossibly horrific ends.

The Player Character is Kazuo Yashiki, a man who dismisses the rumors about disappearing people as stupid Urban Legends. Cut ahead to him in front of the manor of Saya Kujou, where he discovers A.) a scar on his right arm in the shape of a fanged mouth, B.) Saya Kujou herself dead, with flowers growing out of her body, C.) Kujou's life-sized doll that can talk, and D.) the unsettled man has forgotten his own memories. The doll, named Mary, helps Kazuo come to grips with his predicament of identity, before presenting him with a nasty revelation: he indeed possesses the Mark, and he will die by dawn. And Saya Kujou was on the verge of breaking her own Mark... but perished before she could pass that information onto Mary.

Faced with the prospect of death, Kazuo chooses to fight his Mark, with Mary's assistance; but it will not be easy, for the one responsible for the Mark does not want Kazuo to live without a fight, and sends various vengeful ghosts to hinder his progress. He will have to team up with other Mark bearers to find and repel the spirits, and in doing so, hopefully find the one who gave him the Mark.

Unlike most visual novels, Death Mark has more involved gameplay akin to an Adventure Game- Kazuo must venture through each area, collecting items and using them to progress. The game is split into 6 Chapters (five main and a DLC chapter included in later releases) and an Epilogue. In each chapter, Kazuo will meet two or three different Mark bearers who can help him in his investigations, and he must choose which one to take along (as having more than two investigators runs the risk of alerting the spirits) which can impact the gameplay as you need certain characters to do certain things.

Interspersed in between are Life and Death Choices where you must quickly choose between three options in a dangerous situation to survive, and RPG-like boss fights where you and your partner use the items you have gathered to fight the spirits, and must choose the right combinations to win. Depending on what items you choose, you can either Destroy the spirit- getting rid of it at the cost of your current partner's life- or Save it and your partner's life. Which of the endings you get depends on who is alive and dead.

The game has official Japanese site

available. It is followed up by a sequel known as Spirit Hunter: NG.