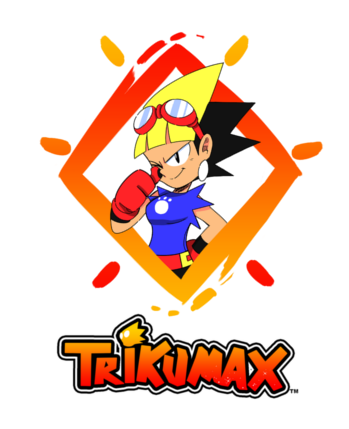 Trikumax is an Action Boss Game developed by Doryan Nelson Studios and Gestmorph Games for Apple Macintosh and Microsoft Windows. It was released on 31st May 2019, with a major update on 26th February 2020 that added four new bosses and fixed numerous bugs. It is available on Steam here

Gaea is a resident of Fauna Island, a peaceful place where its inhabitants live freely and safely under her protection. Armed with her Super Strength, ability to fly and iconic yellow and black Spiky Hair, she's fought off all who dared to endanger the island and the people who live there. One faithful day, the island suddenly comes under attack by a recurring foe: Captain Dr. Surriv. Planting his mechanical army all over the island, their orders are to completely turn every part of it into rubble; upon which he'll build his ultimate base of operations on his journey to world conquest. Learning of the invasion, Gaea wastes no time at all getting into action to save the day once again.