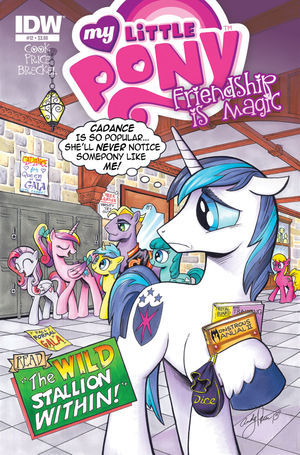 And you thought the series was an Anachronism Stew before!
Advertisement:

A story focused on how Shining Armor and Princess Cadance became a couple. The story takes homage to 1980s teen high school comedies, and the title itself is a parody of Say Anything....

A week prior to the Summer Wrap-Up and Hoedown, the Mane 6 are enjoying tea with Shining and Cadance, when the question of how they met comes up. Shining starts to explain that in Canterlot Academy, he was a bit of a nerd along with his friends Poindexter, Gaffer, and 8-bit. After a scuffle with the polo team captain and local bully Buck Withers, Shining sees Cadance up close for the first time, and immediately falls in love. The beauty of Cadance leaves Shining love-struck, and his three friends agree to help Shining win Cadance's hoof for the next school dance. They first arrange to have Cadance foal-sit Twilight to help get Shining to meet her outside of school. Then, during the big pep rally, the group perform an epic song in front of the whole school to show off Shining's personality. While Cadance seems pleased with the song, Buck quickly ridicules the group with the rest of the school following suit. They come with the idea to sabotage the polo match to make Buck storm off in a huff leaving Shining free to ask Cadance. However, their sabotages only serve to allow Buck to win the match. Shining is heartbroken as Buck asks Cadance to the dance.

At this point in the present, Cadance takes over the narrative, asserting that Shining might have exaggerated a few things. Telling her side of the tale, Cadance reveals that she was similarly in love with Shining at first sight, and with filly Twilight's help during foal-sitting, assured she and Shining were a perfect match. She was more infatuated with him from his parade song, and annoyed at Buck's attempt to shut them down. After overhearing the sister of one of Shining's friends mention Shining's crush on a certain mare, Cadance fears that Shining won't ask her to the dance, and accepts Buck's offer. As she is getting ready with her own friends, she admits that she would rather be going to the dance with Shining, and will try to ditch Buck at the first chance. Meanwhile, Shining and his friends plan a complicated ruse to distract Buck to allow time for Shining to approach Cadance.

At the dance, Cadance sees Shining with his "date", a crossdressing Poindexter, and realizes she can easily go through with her plan, and dumps Buck then and there; Buck realizes that she's about to go off with Shining. With Gaffer and 8-Bit using harnesses from the gym's rafters to annoy Buck, Shining and Cadance are able to have their moment together. Cadance and Buck are unsuprisingly announced as the Queen and King of the dance, and Buck rubs this into Shining's face. However, before he can dance with Cadance, Shining and the rest of the student body stand up, showing how much a bully Buck has been and that Shining is the better pony for Cadance. Shining tricks Buck into one of the harnesses, leaving him high aloft as Cadance and Shining enjoy their first dance and kiss together.

In the present, the Mane 6 are happy with the story, but wonder what happened to Buck. Shining reveals - just as Buck walks into the tea room to the shock of the others - that he's gotten much better since high school.