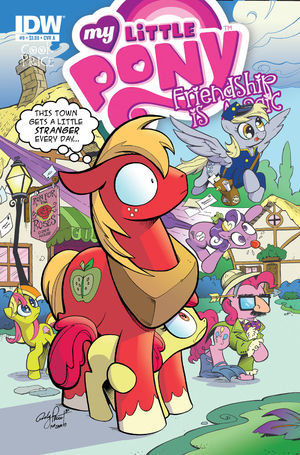 Zen and the Art of Gazebo Repair

For Big Macintosh, today was supposed to be another quiet day on the farm, but when Granny Smith tells him that the gazebo needs fixing, he finds he's run all out of nails, and needs to make a trip into town. Unfortunately, today's the Summer Wrap-Up Festival, and the fairgrounds stand between him and the hardware store. As he tries to make his way though, Big Mac is waylaid by numerous citizens of town - the Cutie Mark Crusaders on another attempt to get their cutie marks with a fireworks launcher, the Cakes to help him babysit their foals for a few minutes, and even Princess Luna drags Big Macintosh to be her partner for the game events. Eventually, he reaches the hardware store - only to find it both closed down for the fair, and in ruins after being hit by one of the CMC's accidental launches.

Determined to find nails, Big Mac returns back into the fray of the festival, now looking for Lugnut, the hardware store owner, running into more antics from the various Ponyville citizens, as well as avoiding another CMC disaster. As the sun sets, he has yet to find Lugnut, and starts to head for home considering the day wasted. Zecora suggests that he think about all the memories of the rest of the day, and he realizes that while he didn't find his nails, he did have a good time. She also points out that she saw Lugnut back at his store. Big Mac finds him there and learns that the store's supply of nails melted when the fireworks hit it. Lugnut recalls that Apple Bloom should have some to spare, since she took all the nails on the farm to build the CMC's fireworks launcher. He gives Big Mac some nails from the launcher, which he has since dismantled, and promises to deliver some lumber to the farm the next day. A confused Big Mac returns home and finds the gazebo in ruins, the latest and last victim of the CMC's pyrotechnics.