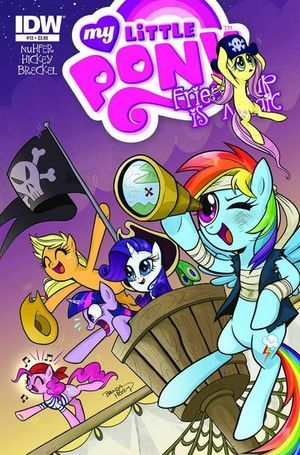 Friendship off the port, Cap'n!
Advertisement:

Fluttershy is afraid to return a fish, Gil, back to the ocean after she helped nurse it back to health, and the rest of her friends and Spike decide to help her out, making it a beach trip to Horseshoe Bay. While the others enjoy the fun in the sun, Fluttershy lollies over releasing Gil, until the sudden arrival of a pirate ship washes ashore and sends Gil into the ocean. The ship's captain, Hoofbeard, disembarks and asks the mares about any ready stallions for joining his crew to search for treasure on the mysterious Gallopinghost Islands. Rainbow Dash and the others assert they are just as capable, and Fluttershy is quick to join, hoping to find Gil. Twilight remains skeptical until Hoofbeard points out that only a skilled navigator will be able to meet the challenge of getting to Gallopinghost to find a valuable jewel via the Map of the Wandering X, a challenge Twilight quickly accepts.

Their first stop is an old sea town, where Hoofbeard tells the Mane 7 that they need to recover the map to Gallopinghost from his old crew that abandoned him. With Fluttershy strangely wanting to stay behind, and Spike acting as Hoofbeard's "parrot", AJ offers to stay behind, suspicious of Hoofbeard's motivation, particularly his need to unload numerous messages in bottles into the ocean. While Fluttershy secretly finds and recovers Gil, AJ makes a special pineapple juice truth serum and gets Hoofbeard to explain himself: that the failure to get the treasure at Gallopinghost will be a one-way ticket to Wavy Jones' locker.

The other four head to an old bar and find Hoofbeard's crew. Rainbow Dash is immediately enraptured by real pirates, and gets the group into a scuffle, and the pirates briefly toy with the idea of holding Princess Twilight for ransom before she puts them in their place with her magic. Foiled, the crew explain that when they were part of Hoofbeard's crew, the "X" on the map literally wandered, and Hoofbeard was driven mad to keep chasing it down. The crew thus stole the map, and because it was indestructible, threw it in the pit of a nearby creature. One of the crew leads them there, revealing the map now guarded by a ghost of a giant crab.

It turns out the crab is really just a scavenger that drank too many energy colas, and with Pinkie's friendly help, they calm the beast, long enough to get the map and discover one of Hoofbeard's messages that appear to to vow to meet an unknown agent in the future. Back on the ship, they find Hoofbeard remains secretive of his goals, and worry more when, following the map, they leave themselves in the area of the sea without wind, stranding them. Twilight convinces the Mane 6 mutiny and take control of the ship, with the pegasi helping to provide wind to get them back to Ponyville. Fluttershy talks to Hoofbeard in the brig, finding that he is more despondent than angry.

Suddenly, the ship is attacked, and the ponies find themselves being attacked by mermares who have been slighted by Hoofbeard's ways before. Fluttershy quickly realizes that just as desperate as she was to find Gil, Hoofbeard was to find these mermares, and they all come to find that the treasured "jewel" is really a mermare named Jewel that Hoofbeard loves and tried to take from the mermares, and hence why the "X" wandered on the map and the numerous letters-in-bottles he wrote. Fluttershy demonstrates that nopony can make anyone stay with anypony else by releasing Gil, and the mermares agree to allow Hoofbeard to travel with them on his ship. Twilight uses her magic to give Hoofbeard gills and fins so he can be with Jewel, and the mermares provide the Mane 6 a mantahawk to helps them get back home.