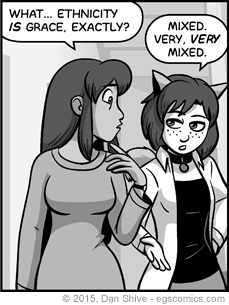 She (usually) looks mixed ethnicity, but she's actually mixed species.
“My mother’s Puerto Rican, my father’s Negro, and we lived in a big Jewish tenement building — in an Italian neighborhood. So every time I went outside, they’d yell, ‘Get him! He’s all of them!’”
— Richard Pryor

Maybe you are the child of that army guy who married The Chief's Daughter. Or perhaps dear mum left home and joined dad on his ancestral family homestead back in rural Smalltownington. (This of course is assuming both your parents are alive and love each other. Star-Crossed Lovers have a tendency to have it rough.) Or you might be the product of less than consensual sex. Or perhaps two people from different parts of the world (or, sometimes in fiction, different species) happened to meet in the course of day-to-day life, fell in love while spending time together, married and decided to start a family. And then you were born.

To describe story elements, this trope encapsulates both mixed ancestry in the sense of ethnicity (real-life and fictional ones) and mixed ancestry with human and/or non-human beings (for example, a half-human half-elf) despite the difference between the two.

Please note that in Real Life, the term "half-breed" is a highly offensive slur, which is why this trope got renamed. Also note that being of mixed ancestry can be depicted as a good or a bad thing in fiction, there's nothing wrong with it in the case of real-life ethnicity.

Subtrope of Liminal Being. Child of Two Worlds, Extra Parent Conception, Lineage Comes from the Father, and Semi-Divine sometimes make use of this trope. See also Nephilim, an obscure Biblical race that are sometimes described as the hybrid offspring of angels and humans.