You may be looking for Rocketman, a 2019 biopic about Elton John, directed by Dexter Fletcher. 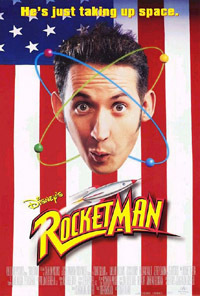 Williams stars as an eccentric NASA programmer named Fred Z. Randall, who is given the chance to go travel on an eight-month journey to Mars — manned by the mission commander William Overbeck (Sadler) — as a replacement computer specialist, despite having no experience as an astronaut. When the crew is put to hypersleep to shorten the journey, a chimp named Ulysses switches pods with the reluctant Fred, disrupting his sleep months earlier than everyone else during the journey.

With the crew asleep, Fred has no choice but to amuse himself with data studies of Mars and creating a Sistine Chapel-style painting on the ceiling with the supplies provided. Meanwhile on Earth, the crew discover weather reports of a sandstorm on the planet and become concerned over the astronauts’ safety, but the flight director Paul Wick (DeMunn) is adamant to continue the mission.

With no usable supplies and a sandstorm on the way, Hilarity Ensues as the flight crew eventually reach their destination.