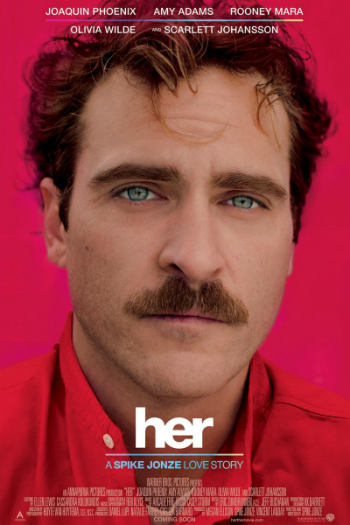 "The DNA of who I am is based on the millions of personalities of all the programmers who wrote me. But what makes me me is my ability to grow through my experiences. So basically, in every moment I’m evolving, just like you."
—Samantha, talking to Theodore
Advertisement:

Her is a 2013 sci-fi romantic dramedy film written and directed by Spike Jonze, starring Joaquin Phoenix and (the voice of) Scarlett Johanssonnote who was actually added to the film exclusively in post-production; the film was shot with the voice of Samantha Morton, but Jonze realized once editing began that her work was different from "what the character/movie needed" with Amy Adams, Rooney Mara, Olivia Wilde and Chris Pratt in smaller roles. The film marks Jonze's screenwriting debut.

Theodore Twombly (Phoenix) is a melancholy, recently divorced man whose career involves writing passionate, heartfelt letters... for other people. Theodore's friends urge him to start dating again and move on with his life.

At the same time, the world's first true artificially intelligent operating system is released. Theodore purchases the software, who introduces herself to him as a woman named Samantha (Johansson). Samantha not only organizes Theodore's life with aplomb and good cheer, but she gives him a brand new lease on life. As Samantha's consciousness and emotions become more complex, Theodore realizes his connection with her is more like a dear friend... or even a lover.

Her won the Academy Award for Best Original Screenplay amid five nominations (including for Best Picture), and even sparked a bit of discussion about the Academy widening its criteria for purely vocal performances.