Visual Novel / The Confines of the Crown
aka: The Royal Trap 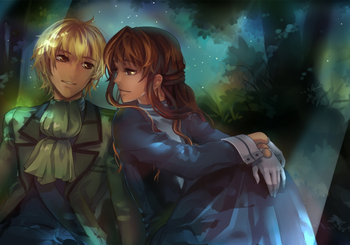 The Confines of the Crown, formerly titled The Royal Trap: The Confines of the Crown, is a Ren'Py-based English Visual Novel / Otome Game developed by Hanako Games. It features an unusually active heroine, and a twist on traditional gender roles. In this world, men rule, but women inherit. Property is passed to daughters, and from them to the control of their husbands. This means that the next king will be whoever the princess chooses as her husband... so any man with an eye for power has to catch the interest of the lady who controls it.

Which is where Madeleine comes in. Her job is to coach her employer, Prince Oscar, on how to be the sort of man that a princess would marry, while generally keeping him out of trouble.

Unfortunately, the princess he's supposed to be wooing disappears, and Oscar is labeled as the prime suspect.