Video Game / My Little Pony Rise Of The Clockwork Stallions 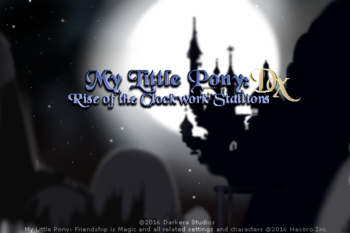 The main menu of the DX version during the night, without text.
Advertisement:

My Little Pony: Rise of the Clockwork Stallions is a 2D platformer Fan Game of the My Little Pony: Friendship is Magic TV show developed by Darkera Studios. It was developed with Game Maker. The regular version was finished in 2015, and the Director's Cut version with updated graphics and new content was finished in 2017. It's the Spiritual Successor to My Little Pony: Magic Shards, sharing various features with the game and being developed by the same team. The game features many, many playable characters, unlockables, and secrets. The regular version can be downloaded here

and the Director's Cut version can be downloaded here

The Plot of the game is that Twilight's friends have been kidnapped, strange robot ponies have appeared, and it's her job to rescue them and figure out what's happening.