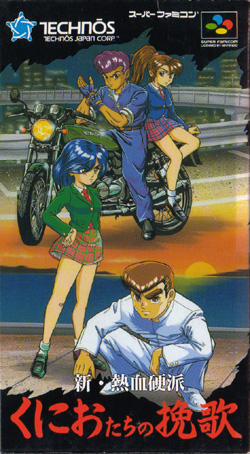 Shin Nekketsu Kōha Kunio-kun: Kunio-tachi no Banka is a game released on the Super Famicom on April 29, 1994, by Technōs Japan Corporation for Japan only as a part of the Kunio-kun series. This game is said to take place between Nekketsu Kōha Kunio Kun (Renegade in the US) and Downtown Nekketsu Monogatari (River City Ransom/Street Gangs in the US and Europe repsectively), which would explain why Riki had a different girlfriend at the time among other things.
Advertisement:

The game's story involves the main heroes, Kunio and Riki, being framed for a hit-and-run incident caused by identical strangers. To make matters worse, Nekketsu High School has been taken over along with Hanazono High (which is totaled) and the aforementioned strangers are still causing trouble out there during our heroes' stay in jail. So after earning the respect and help of another thug (who wants them to join his gang at first) and his two lackeys they have just throttled, Kunio and Riki plan an escape from the prison and fight off the police. The adventure has just begun from there. Who were those doppelgangers and why did they frame the boys? Is there a bigger man behind the scenes?

In June 2021, a re-release and localization was announced under the name of River City Girls Zero. Wayforward Technologies, developers of River City Girls, is involved with this updated release, adding new anime cutscenes and a song from River City Girls composer Megan McDuffee. It is currently stated to come out for the Nintendo Switch by the end of 2021, with other platforms planned further down the road.