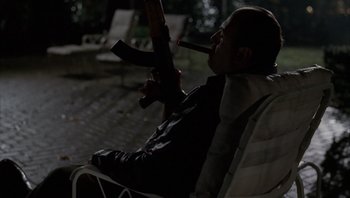 A year after the Sopranos' separation, Carmela lives alone with a largely hostile AJ while Tony has moved into his mother's old house. Meanwhile, a number of mobsters nicknamed the "Class of '04" are due to be released from prison, among them Tony's cousin Tony Blundetto. Watching a news report about the Class of '04, Tony is excited to see his cousin again, though trouble brews as the report suggests the numerous incoming New York mobsters, among them vicious hitman Phil Leotardo and consigliere Angelo Garepe, may cause discord among the ranks of the larger family.

Carmela orders AJ to retrieve a vacuum cleaner from the pool house one night, and he is confronted by a bear in their backyard. The bear leaves without causing any trouble beyond damage to the patio furniture, but AJ is terrified by the encounter and Carmela is shaken by her child's close encounter with the animal. The police send two officers from the Department of Fish and Game to investigate the incident, who dissuade any acts of violence against the wildlife and cite Tony's duck feed as the cause for the bear's intrusion. The bear returns the next morning, and Tony returns home as Carmela is calling the police again. Tony is slightly resentful that Carmela called the authorities instead of him, and they get into an argument about Tony spoiling AJ with gifts. As the topic turns to their separation, Tony threatens that he'll have Furio Giunta killed if he ever resurfaces in Italy.

The first mobster from the Class of '04 to emerge is Feech La Manna, a legendary old "Mustache Pete" in Jersey. He visits Junior and speaks to him and Tony, expressing eagerness to get back into business and set up a shy again. Tony and Junior seem amenable to this, though Feech briefly lets slip that he's heard about the bear in the Soprano backyard. In the interest of keeping up appearances and protecting his family, Tony sends low-level mobsters to guard the house at night, including Benny Fazio and Little Paulie Germani.

While hanging out at the Bing with the guys, Christopher and Paulie Walnuts recount their misadventure with the Russian from "Pine Barrens". Christopher offhandedly suggests the whole incident was Paulie's fault, causing tensions to flare up and rapidly accelerating the situation into a fight that has to be broken up. Paulie announces that his friendship with Christopher is over. This conflict spills over into other aspects of the life, as Christopher is expected to pay for dinner at "goomah night" with the guys, and notices Paulie deliberately ordering too much food for himself, evidently just to put financial pressure on Chris. Chris complains about this to Tony, who reminds him that his lower rank obligates him to pay. At the next dinner, however, Chris heads to the bathroom when the check arrives, forcing Paulie to pay. The next day Paulie informs Chris that he's now in debt to him, and must pay up or he'll start accruing interest.

While watching TV with Valentina after a tryst, Tony is briefly transfixed by The Prince of Tides. Inspired by the movie's depiction of romance between a psychiatrist and patient, he reconnects with Dr. Melfi, sending a gift basket to her office and flirting over the phone when she calls to thank him. Tony attempts to make romantic overtures toward Melfi, but she politely declines, taking note of Tony's separation from Carmela and suggesting that this romantic interest is suggestive of a desire to resume therapy. Melfi later has a sex dream about Tony.

Angelo Garepe, another of the Class of '04, is released and joins a meeting with Tony, Johnny Sack and Carmine Lupertazzi. During the meeting Carmine seems distant, commenting that he smells burning hair, and suddenly suffers a stroke, collapsing. As Carmine falls into a coma, Johnny makes a call to his son Little Carmine, who urgently comes down from Florida to care for his father. Tony and Johnny find themselves alone together in the hospital, and Johnny reminds Tony of his refusal to follow through with a hit on Carmine a year before, something Johnny still resents.

Tony briefly speaks to Silvio about a "platonic female friend" he's attempting to court, vaguely describing the difficulty of the situation. Silvio is left confused by this. Later Tony schedules a therapy session with Melfi, which he reveals was actually an excuse to meet with her in person and again float the idea of starting a romantic relationship with her. As Melfi attempts to let him down gently, again citing the unprofessional nature of such a relationship, Tony forcefully kisses her. Melfi becomes more assertive after this, and Tony leaves. Later, Melfi speaks to Dr. Kupferberg about the situation. Kupferberg is concerned, believing that a man like Tony will become dangerous if he doesn't get what he wants, and suggests calling the police. Melfi confesses that she used to find Tony attractive, but is morally repulsed by his lifestyle and behavior.

At another goomah dinner, Paulie deliberately overspends out of spite for Christopher, ordering multiple courses which he doesn't finish, then sending an expensive bottle of champagne to a table of unattractive women across the restaurant. Chris, resentful, picks up the check. He and Paulie argue outside, and their confrontation nearly gets violent when they are interrupted by the restaurant's waiter, who is disappointed by the meager tip Christopher left him. When the waiter refuses to back off and eventually insults the mobsters, Chris loses his temper and throws a rock at the back of the man's head, causing a seizure. Paulie then shoots the man dead and they both flee. The next morning they reconcile over the phone, both unsettled by the incident.

Tony approaches Melfi again, this time ambushing her outside her office and demanding she give him a straight answer. Melfi dances around the subject but ultimately explains that she could not abide a relationship with Tony because of his violent and immoral lifestyle. Tony loses his temper, storming out and calling her a cunt. He then drives to Carmela's house and takes over guard duty in the backyard from Benny, brandishing an automatic rifle while smoking a cigar alone in his old backyard.