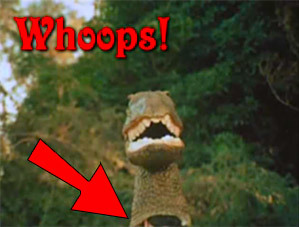 WATCH OUT! IT'S A BIG GIANT HAND-PUPPET!

"Godzilla is either breaking the laws of physics or he's throwing around an empty rubber suit!"
— Tom Servo, Mystery Science Theater 3000

When special effects look really cheap and dodgy, to the point of pulling the audience out of the narrative, you have a Special Effect Failure. All-too-common prior to 1980, and still with us today despite relatively inexpensive digital effects that can be very convincing and realistic... but often aren't.

The audience's expectations for effects have grown up with the media. For example, it is obviously a dummy being thrown from a train in The Great Train Robbery — but since it was filmed when filmmaking itself was in its infancy (1903 to be exact), people forgave it. If a modern remake had done that, however, they would not have been nearly as kind unless it was for other reasons; Star Wars raised the bar for visual effects so high that only the most advanced pre-1977 effects can measure up. It should also be noted that the modern push to update everything to HD can also result in a retroactive form of this, as a matte painting in a 1980s VHS release looks fine, but on the cleaned up, "remastered" Blu-ray looks like, well, a cheap matte painting in the background. Same for video games when prerendered backgrounds look weird.

Sometimes a Special Effect Failure is caused by resorting to Off-the-Shelf FX. Many examples are just plain Bloopers (a literal failure of the effects). In a video game it can be because of Model Dissonance being revealed by a glitch or oversight. In animation, it can be lumped in with Off-Model.

Sometimes cheesy FX are regarded as part of the So Bad, It's Good charm of a work. Sometimes authors will intentionally aim for this as a form of Stylistic Suck.

The elevator that helps Mickey Mouse rise to the stage for the show's finale malfunctions. The show ends abruptly (with some dancers booking it behind the curtain and some running offstage) and an announcer is heard apologizing.

The elevator that helps Mickey Mouse rise to the stage for the show's finale malfunctions. The show ends abruptly (with some dancers booking it behind the curtain and some running offstage) and an announcer is heard apologizing.