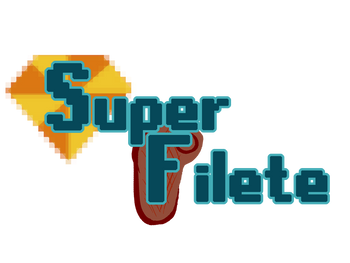 Bring out your inner steak.
Super Filete is a comedy-adventure book written in early 2012 by Fernanda Jayme and Amy Vargas, also known as Team Mahoghany. The story takes place in Chrome, where Filete, a girl who likes videogames, anime and geek things in general, eats by accident a radioactive steak. Eventually, she has a bad time with magnetism shenanigans, but slowly gets the hang of it.
Advertisement:

And so she becomes Super Filete, a superheroine who saves the city from evil with the help of her Infinite Hoodie! Then Filete's second year in middle school begins. And she meets Cookie, the new girl who is immediately feared for being the daughter of Lord Charles Bucket Jr., the first villain to ever exist. Filete befriends her, no matter how worse her (already bad) reputation can ever get.

And that's just the tip of the iceberg, with evil monsters attacking more frequently from that moment on, an evil psychologist teacher who seems to always be against Filete, hipsters, a science fair gone wrong, and the eternal battle between good and evil.

As of now, there is a short film(also produced by Team Mahoghany, with little relation to canon). The first book is being rewritten and expanded, with some sequels on the work:

(in spanish only). Super Filete also has its own Facebook page

Note: Late-Arrival Spoiler Warning for 30 In Tumblr onwards, as it hasn't been published beyond the first chapter. Don't say we didn't tell you.