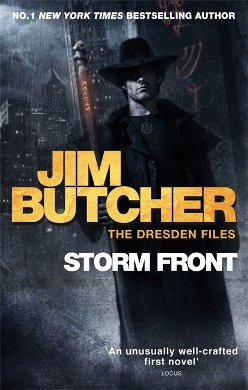 A Storm Is Coming.
Advertisement:

The One With… our introduction to Harry Dresden, wizard PI.

Harry Dresden knows that being the only one working in your field can be tough. For example, being a wizard who works as a private detective in Chicago. Things start getting especially complicated when Harry discovers that someone is using black magic to kill people... and he's the only suspect.

What looked like it was going to be a simple murder case turns into a race against time as Harry tries to prove his innocence before the White Council pronounces judgment against him... or he becomes the next target.

Storm Front is the first book in The Dresden Files, written by Jim Butcher. Now has its own Shout Out page.

No relation to the far right website Stormfront (note the lack of a space between the words), or with the character from The Boys, or the video game.