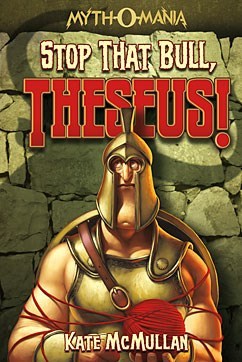 Stop That Bull, Theseus! is Book V in Kate McMullan's Myth-O-Mania series, published in 2003. Hades recounts the adventures of his forgetful nephew, Theseus, from ridding the Trozen-Athens road of murderous "bullies", to wrestling the half-bull, half-man Minotaur.