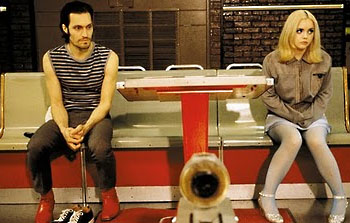 Buffalo '66 is a 1998 indie film starring Vincent Gallo (who also co-wrote, directed, and composed the score) and Christina Ricci.

Billy Brown (Gallo) has just been released from prison and the first thing he plans to do is introduce his wife to his parents. The problem with that plan is he doesn't have a wife, so he kidnaps a ballerina named Layla (Ricci). After a brief struggle and a very awkward dinner, Layla decides to stay with him for a night of bowling and "spanning time". She soon learns that Billy plans on getting even with the football player who was indirectly responsible for his imprisonment. What follows is a dark comedy about depression, revenge, and finding love.