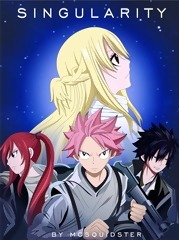 A ragtag crew and a mysterious girl.
Singularity

is a Fairy Tail SciFi Alternate Universe story by McSquidster

. The story takes place eight years after a war between The Council and The Balam Alliance and the galaxy as been on edge ever since. The story follows a small crew of a space ship consisting of Erza, Natsu and Gray who do jobs for the Council. When an acquaintance of Erza's ask that they take someone (i.e. Lucy) in for a little while Natsu has reservations over it. That quickly changes when he learns who and what their guest is and this will lead the crew into something much bigger.