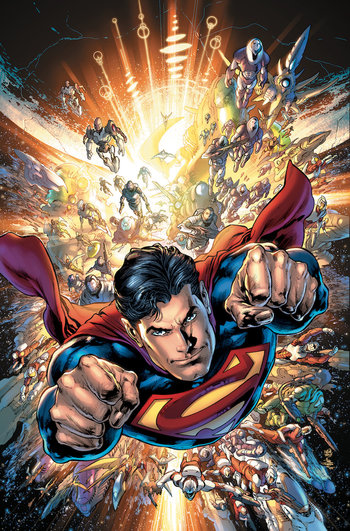 A new era begins.
For seventeen years, Brian Michael Bendis was a driving force behind Marvel Comics: creating the Ultimate Marvel Universe, reinventing The Avengers by disassembling them and reassembling them as the New Avengers and created highly popular characters such as Jessica Jones and Miles Morales. Upon leaving the "House of Ideas", Bendis put down his stakes in DC Comics and its wunderkund, Superman.

This new era officially began with Man of Steel (2018), a "pilot episode" that pits Superman against the new villain Rogol Zaar. With Man of Steel over, the story continues in the relaunched Superman and Action Comics and sees Superman explore his place in the world and is forced to confront the possibility that he might not be doing enough to help humanity.

Bendis' run with the Superman franchise ended in December 2020, with Phillip Kennedy Johnson becoming writer of Superman and Action Comics and Bendis himself taking over Justice League in March 2021, after the Future State event comes to an end.