The Character Page for Twitch Plays Pokémon Alpha Sapphire. For a directory of all character pages, as well as characters shared between runs, see here.

The hero of the game, a young girl who moved to Littleroot Town. She chose Torchic as her starter. She seems to love being near trees.
Advertisement:
Brendan

!!!0999 qq's rival, the son of Professor Birch. His starter is Helioptile and his specialty type is Electric.
Wally

An ill child from Verdanturf Town. He captures a Ralts with help from !!!0999 qq. When battled at Mauville City, it had been randomized to a Lucario. His Rival Battle team was comprised of Hariyama, Emboar, Conkeldurr, Primeape, and Mega Lucario.
Team Aqua

The Antithesis of Team Magma, Team Aqua's goal is to expand the world's oceans with the power of Primal Kyogre. Supposedly.

Team Aqua's leader, who used Fire and Ground Pokemon when fought at Mt Chimney. His final team, while it did lead off with a Water-type (Swampert), was also entirely Ground-type, and his Mega was none other than Camerupt, Maxie's signature Pokémon. 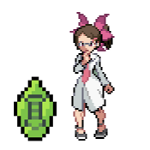 The Rustboro City Gym Leader has been randomized into Bug-type. Her Pokémon are a Butterfree and Volcarona. 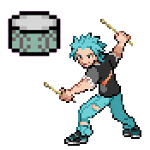 The Dewford Island Gym Leader has been randomized to Steel-type. His Pokémon are a Forretress and a Klang. 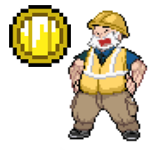 The Mauville City Gym Leader has been randomized to Ground-type. His Pokémon are Marowak, Gabite, and Rhyperior. 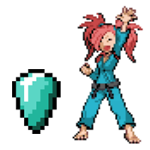 The Lavaridge City Gym Leader has been randomized to Dragon-type. Her Pokémon are Fraxure, Dragonair, and Hydreigon. 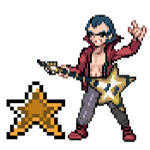 The Petalburg City Gym Leader has been randomized to Rock-type. His Pokemon are Rhydon, Carracosta, and Aurorus. 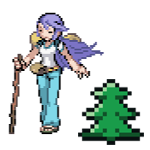 The Fortree City Gym Leader has been randomized to Grass-type. Her Pokémon are Exeggcute, Serperior, and Ferrothorn.

Tate and Liza (Chad and Lucy) 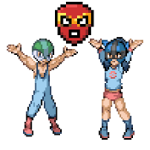 The Mossdeep City Gym Leaders have been randomized to Fighting-type. They battled using a Gallade and a Lucario. 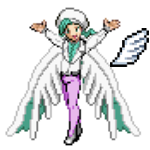 The Sootopolis Gym Leader has been randomized to Flying-type. His Pokémon for his Gym challenge were Talonflame, Skarmory, Lugia, Pidgeot, and Chatot. When rematched in the Delta Episode, his team consisted of Noivern, Braviary, Vespiquen, Salamence, Unfezant, and Aerodactyl.
Elite 4 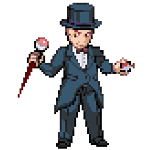 The first member of the Elite Four has been randomized to Psychic-type. His Pokémon are Hypno, Swoobat, Espeon, Alakazam, and Meowstic. In the rematch, he has Gallade, Alakazam, Exeggutor, Unown A, Xatu, and Mega Slowbro. 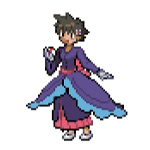 The second member of the Elite Four was randomized to her natural type, Ghost. Her Pokémon are Gourgeist, Drifblim, Misdreavus, Doublade, and Chandelure. In the rematch, she has Dusknoir, Aegislash, Jellicent, Mismagius, Trevenant, and Mega Sableye.

The third member of the Elite Four was randomized to Dark-type. Her Pokémon are Malamar, Bisharp, Mightyena, Liepard, and Spiritomb. In the rematch, she has Greninja, Hydreigon, Spiritomb, Sneasel, Krookodile, and Mega Absol.

The fourth member of the Elite Four was randomized to Poison-type. His Pokémon are Arbok, Amoonguss, Venusaur, Gengar, and Muk. In the rematch, he has Ariados, Tentacruel, Nidoqueen, Venusaur, Arbok, and Mega Gengar, giving his rematch team the most similarities to his original team.

A Bug Catcher with Zinnia's title and picture. When rematched, he turned into a Gardener.

An Aqua grunt that kidnapped Peeko.

A Collector who somehow ended up randomized to his own Trainer class. He had an Eternal Flower Floette with Steam Eruption.

A Hex Maniac on Mt. Pyre that can be rematched, and has a chance of giving out a Dusk Stone upon being defeated in rematches; this was determined to be the easiest way to obtain a Dusk Stone to free R-Ceus from the lamp. As such, plans were made to rematch her as many times as it took to get a Dusk Stone well before even reaching Mt. Pyre. She was randomized to a Worker. It was then discovered that the Dusk Stone could only be obtained from her post-E4 rematch team. When rematched, her class rerandomized to Preschooler. It later emerged that the item giving mechanic had been bugged and she would never have given the Stone, so the game code was edited to make her give it out properly, only to result in bugging her dialogue coding. Eventually Nina was just given 2 Dusk Stones by Deku.

A Fisherman who was randomized to a female Team Magma Grunt. Hir Swanna created a cancer match by combining the Shadow Tag ability with having False Swipe as its only damaging move, up against xsssffjjju whose only damaging move was the low-PP, not-very-effective Cross Chop.

A Pokémon Breeder who was randomized to a Maid. Her full team of Water-types defeated Agent 999 many times, and since she was placed in a way that beating her was not necessary to progress, she wasn't actually defeated until after the Elite Four, 8 days after initially being challenged.
Non-Trainers
Advertisement:

!!0999 qq's starter Torchic, which evolved into a Lampent at level 19. It was then evolved into Flareon using a Dusk Stone after beating the rematch Elite Four. It came pre-loaded with Peck, and the Arceus-only Judgement. Its ability is Synchronize (formerly Victory Star, Defeatist).
Chansey

A female Ferroseed captured after Espurr's release. Her ability is Sweet Veil (formerly Forewarn). Evolved into Cacturne during an underwater battle.
999

Rayquaza, captured atop the Sky Pillar. Its ability is Speed Boost and its Mega Ability is Pressure.
00000 NYYYYYY

The first egg produced by the Jellicent couple hatched into a male Frillish. His ability is Stench.
AENNNN

The second egg produced by the Jellicent couple hatched into a male Frillish shortly before the stream ended.

An egg produced by !uupui kkkk and Swin1rhu44d5 at the daycare despite them apparently not getting along very well at all. It hatched into a female Swinub, initially nicknamed Swinu and later Swinu 1xcc, proving that eggs are not randomized. She eventually evolved into Marshtomp and then into Lanturn. Her ability is Frisk.
Ééééé

A Glameow captured on Route 104. Like Zexy before him, his name indicates him being French. Its ability is Sand Force. He was deposited in the PC before leaving Slateport City.
Gg9pp

A Squirtle captured on Route 102. Its ability was Normalize. It evolved into Kingler at level 18 and gained Refrigerate instead.
ézzxééééé"::

A French (or Kalosian) Glameow captured on Route 104. The only female member of the original team, paired with fellow French Glameow Ééééé during his time on the team.
xsssffjjju

A male Shroomish caught after the purge. Its ability is Gooey.
Snivy Usssij

A male Snivy captured on Route 114. It evolved into Sawsbuck at level 22. His ability is Rain Dish. (formerly ???)
Wynaut8uuutg

A female Wynaut captured after everyone but R-Ceus had been deposited or released. Later evolved into a Gothorita. Her ability is Steadfast.
Ééééééé

A female Corsola captured after R-Ceus and Luvdisc were put in the Daycare. Swept Norman's team after the Gym Trainers had taken out the rest of the team prior to the first attempt.
Latiazzn

The younger sister of the Eon Pokémon siblings. The party had an empty spot when she was encountered, so she didn't have to force anyone out.
Lord Shield

A female Glaceon captured in Shoal Cave. Her ability is Tough Claws. She was part of the original Elite Four team, but got boxed during the Delta Episode for Rayquaza.
B-List Pokemon
Pokemon that didn't make much of an impact on the run.

A Surskit captured during the grinding session after the team was reshuffled and couldn't progress.

A Beldum caught in Granite Cave.

A Dratini caught in Petalburg Woods.

Like Latias, the gendered symbol in her name does match her gender.

U the Unown U

During the quest for the Dusk Key, Nina and/or the Voices seemed to suffer Sanity Slippage, resulting in even less coherent names than usual. In a span of 16 captures, 13 Pokémon received nicknames and 11 of those 13 had at least one symbol in them. The list, in order of capture:

 ♀ ♀ZzZz♀♀ the Nidoran♂note The "Zz" is actually a single character with two z's diagonal to each other, used to represent sleeping.

QPZzZz~~♣♣♣♣ the Axew note The "Zz" is actually a single character with two z's diagonal to each other, used to represent sleeping.

ZzZz the Tropiusnote The "Zz" is actually a single character with two z's diagonal to each other, used to represent sleeping.

Pokémon that didn't receive nicknames upon being captured.

A male Spoink caught shortly after the second massacre. He was then placed in the Daycare in order to rescue R-Ceus.
Swin1rhu44d 5

A female Swinub caught shortly before the massacre who was added to the team briefly. She joined fellow pig !uupui kkkk in the Daycare once R-Ceus had been retrieved.
Duskugbe

A male Duskull caught after the second massacre. His evolution to Jellicent came after Wingull9xx88's. His ability is Flame Body (formerly Shed Skin).
Wingull9xx 88

A female Wingull caught after the second massacre. She evolved to Jellicent at level 26.

A Rufflet captured on Route 102. Its ability is Multitype.
!yhyytrgssxx

A Lotad captured in Petalburg Woods, it evolved into a Squirtle at level 14 and to Kingler at Level 23. It was boxed in Mauville City and then released.
Ééé2233éééaa

A male Diglett captured after R-Ceus and Luvdisc were put in the Daycare. It evolved into Flygon at level 29. Its Ability is Mummy (formerly Early Bird)
Shroomisho p

Another male Shroomish caught after the purge. It evolved into Ivysaur at Level 23, and Roserade at 41. Its ability is Forewarn (formerly Multitype, Blaze).
Masquerain

A Weedle captured in Rusturf Tunnel, completing the remaking of the party. It didn't receive a nickname, and later evolved into a Spewpa, then into a Masquerain. Its ability is Keen Eye (formerly Insomnia, ???).
Lord Root

Feeling that the game was progressing too quickly, the chat decides to take a detour to get a fossil and revive it after defeating Norman before continuing on with the plot. They then decided to make sure it was really a Lileep due to the randomizer... and ended up with the second PC massacre.
Ra66rb8i!!!!

A female Luvdisc captured following the first party reboot. Lore has it that she believes she's an Espurr.
Horseatuny

A female Horsea caught after the second massacre. She evolved into Barbaracle at level 32. Her ability is Iron Barbs.
Released B-List Pokemon
Not all B-List Pokemon live forever in the PC safely, some are released. These are the poor souls.

Shiny Magmar
A Shiny Magmar encountered in a horde battle. The Mob ran from it. As per TPP tradition, like the Shiny Chinchou & Pikachu before it, the encounter was seen as a sign of luck.