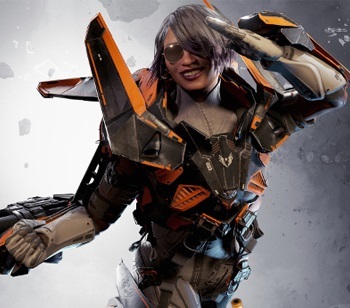 A proud member of the Valkries and a fan of 20th century action flicks, Maverick styles herself after the protagonists of her favorite films. Toska-9 has earned Mavericks undying hatred for her betrayal of the Valkyrie unit, and Maverick plans to exact her vengence the next time they meet. 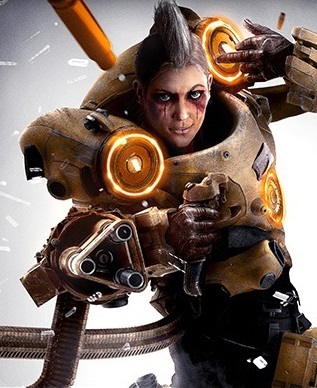 Toska 9 was a promising rookie in the Valkyries, a prestigious all female combat unit, and seemed destined for a life of honor and glory... until she threw all of it away. Her reason? Upholding the law paid less than breaking it.— 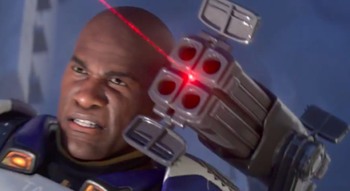 A born leader with a burning need for justice, Axel was made to be a TASC special agent. Always first to lead the charge, and almost impossible to out maneuver, he remains the image of the perfect agent. Driven by duty, no one is more ready to bring the criminal underworld to their knees. 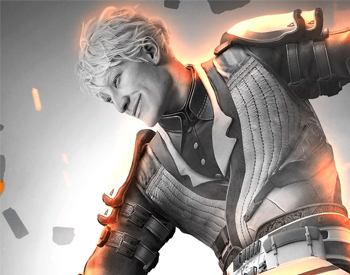 Shura Corp's enforcer by day, party animal by night, Kintaro is a socialite sociopath and enjoys every second of it. He's a narcissist who wants only the finer things in life, but really only loves himself. Kintaro shows up to work for one reason only, and it's not for family honor or a sense of duty. It's because the job lets him back up his bragging rights. Truly ruthless, it isn't Kintaro's money or power that intimidates his enemies. He's a lethal opponent who enjoys killing as much as he loves caviar. 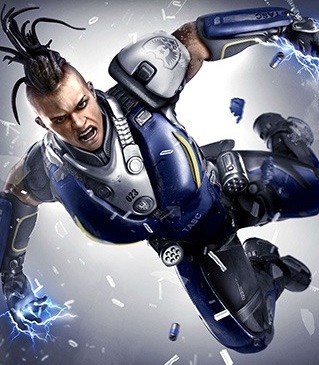 Born into a poor family, Bomchelle managed the herculean task of fighting her way up to the top without ever compromising her morals or sense of justice. T.A.S.C saw her potential and recruited her straight from her professional fighting circuit, and she hasn't looked back since. 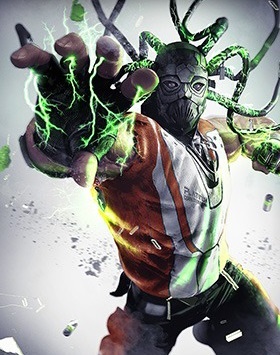 Known as the man they couldn't execute, Cronos is now a member of the Lifers, ex cons who used the effects of the shattering to escape jail. The experiments performed on him, culminating in a trip to electric chair, have mutated him into something almost inhuman. Now that he's out, he plans on paying back all the pain he suffered under torture onto every law enforcement agent he can get his electrifying hands on. 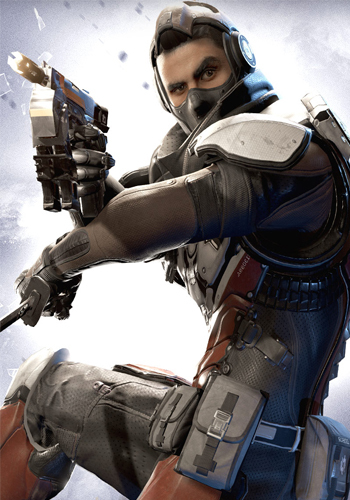 Masked heroes typically exude an air of mystery and intrigue, and then there’s Deadlock. While he is a bit of a daredevil who revels in putting his life on the line, he can be a bit of a dork and believes his masked persona makes him cooler than he actually is. That all said, he may not actually ooze cool, but at least he can back up his ego with incredible skill.
Helix 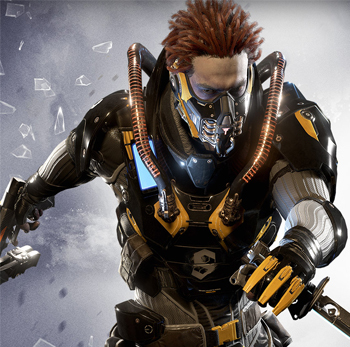 Cold, calculated and precise, Helix handles his affairs with The Syndicate with the utmost professionalism and never leaves a paper trail. Law enforcement intelligence agencies have yet to officially link him with any crime, or even unmask his true identity, but they suspect that he is a weaponized Hadronium dealer who works for The Syndicate as Faust’s right-hand man. 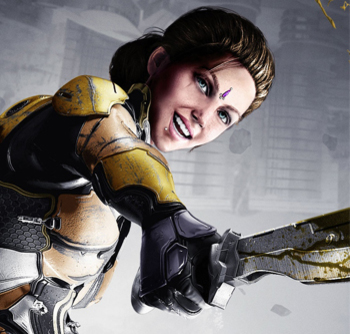 Unsettling peppy and chatty even as she tears breakers limb from limb, Hellion is by far the youngest member of the Valkyries, and the only one who can't fly. Hellion unnerves her teammates, but terrifies her enemies, never once losing her signature grin.
Kitsune 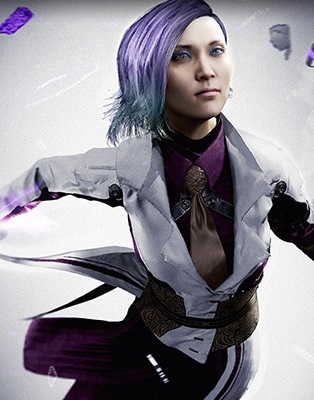 Kitsune has run the Shura Corporation with an iron fist since the day she stepped up as heir. Despite her youth, Kitsune acts with decisive finesse in the boardroom as much as the battlefield. Shrewd, solitary and occasionally sarcastic, her skill with a blade is matched only by her need for vengeance. With the full might of Shura Corp. behind her and her brother, Kintaro, backing her up, nothing will stand in her way. 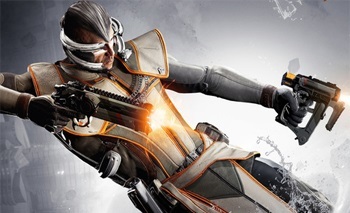 Abbadon is shrouded in mystery. He has no known medical history, birth certificate, or records of any kind. While he appears to be 30 - 40, his appearance hasn’t changed in the last two decades. All that is known about this mysterious figurehead is that he leads the Archangels, a group of vigilantes that the law enforcement agencies seem to tolerate.
Faust 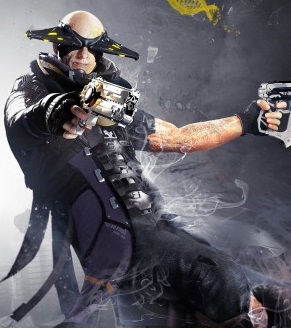 An infamous criminal who was thought to have been dead for many years, Faust's reemergence from the grave has thrown law enforcement agencies across the globe into disarray. Although his motivations and goals - like that of the The Syndicate who he represents - are largely unknown, what world authorities can all agree on is that he is extremely dangerous. Codenamed by those who have marked him as the world's most-wanted criminal, Faust wears his alias with pride. 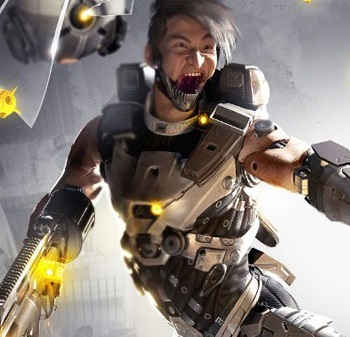 Feng is the head of the Shura Corp.’s medical research laboratories in their secretive private security division. In the pursuit of scientific gain, he decided to conduct a dangerous experiment on himself which resulted in Feng requiring several cybernetic enhancements to his jaw and arm. Although it nearly killed him, his experiment was ultimately a success, and his newfound power could be the key to Shura Corp’s future global dominance.
Tokki 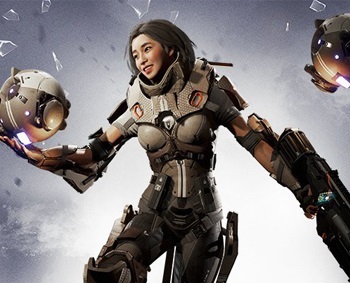 Tokki is a staunch supporter and believer in what the Valkyries stand for. Dedicating her education to medicine and medical technology, she would ultimately merge it with her childhood dream of being a Valkyrie and join up with them as an elite, front-line Battle Medic. 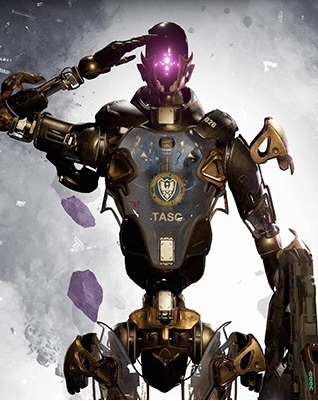 Sleek, sexy, yet terrifying, these units were built with the latest advancements in materials and technology. They are not only psychologically and physically imposing, but they were built for maximum effectiveness and civilian safety in a time where the battle is being fought on the streets outside our homes. AEGIS units run on the frontline of TASC operations, offering their agents close combat shielding and support.
Nash 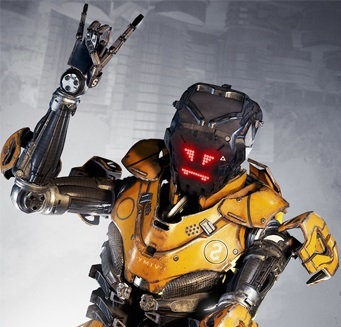 Still functionally similar to the AEGIS units currently employed by law enforcement agencies across the US, Nash Sentry units are primitive in appearance and are made from less advanced alloys and metals. Brought to a local Lifers safe house, he was reprogrammed for Lifers use and was given a “personality”. All responses were replaced with lines from songs and movies from the late 20th century.