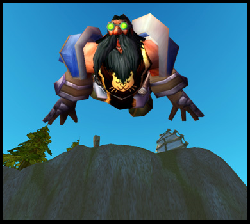 Flintlocke is a dwarf warrior who, strangely enough, sees himself as a hunter. As such, he uses ranged weapons for most of his more powerful attacks, but also uses hammers, maces, and other blunt weapons. Despite this, he has a surprising success rate with his odd tactics, generally ending up with a One-Hit Kill. 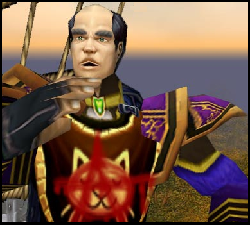 Schweitzer is the group's healer, though his position is highly debatable. "Doc" never attacks, instead favoring a tactic of hiding behind trees and columns or running away, only coming out of hiding when there is something for him to loot. When no other option is available, he has been known to pee his pants as a direct response. While it may seem like cowardice to the untrained eye, Doc has come to rationalize this behavior with a complicated explanation. 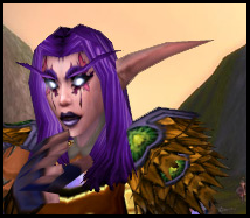 Kathrena is a Night Elf hunter, and is Flintlocke's unofficial girlfriend. Their relationship is a tumultuous one at best, since she has a high respect of nature and he has a propensity to use small furry mammals as ammunition. She is a highly skilled archer who can take down most opponents with a single arrow to the throat or chest, leading her to admit that maybe hunters need to be nerfed. She used to have a pet spider named Ittsy Bittsy who tried eating Flintlocke's face on their first meeting. 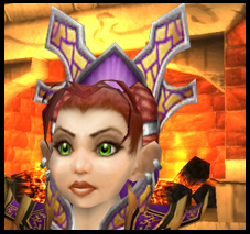 Bloodrose is a female gnome mage with almost full Arcanist gear who usually ends up doing all the real work herself. She is the consummate powergamer who "plays this game to win". Flintlocke often calls her a "munchkin". She is such a powergamer that she once gained a level just by talking at length about battle strategy. 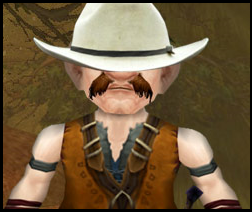 "I lewt teh hat."
Class: Rogue

Lowping is a gnome rogue played by a man who has not been at his keyboard in over a year before returning, leaving his character to be handled by scripts and macros downloaded from a Chinese fileserver that have Flintlocke set on /follow and /assist. He was later revealed to be not a Chinese gold farmer, but an American lawyer who dabbles in gold farming as a hobby with characters across several games. He's stolen the Ultimate Goblin Engineered Weapon four other times before now, although he wasn't at his keys at the time. 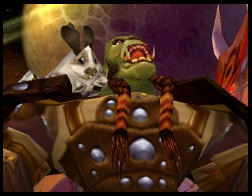 "I do this to honor my ancestors, who fought and died to grant me this opportunity."
Class: Hunter

An orc roleplayer who tries to stick to his character, Rok'tar's in-character father is an NPC quest giver who is soon killed by Flintlocke's party, enraging him and motivating him to level up quickly so he can get revenge. 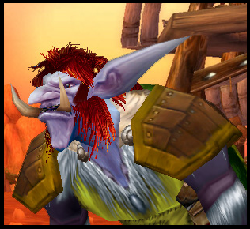 "I plant funny heads. In the ground."
Class: Shaman

A troll shaman Rok'tar meets in Durotar, Gravy is played by a stoner and is almost always high, and can often be found with a bong or hallucinating. This means he doesn't roleplay very much, although sometimes he will talk with a troll accent. In their first encounter he tells Rok'tar that he made the character so he could get to put funny heads in the ground. 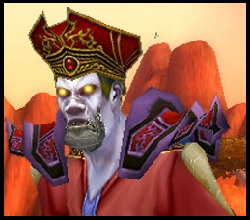 "Life is the disease. I am the cure."
Class: Priest

Rok'tar and Gravy met this character while questing. The priest is an experienced gamer, in this respect partly similar to Bloodrose from the Flintlocke comic, although he does not seem to be as obsessed with leveling up and getting the best gear as Bloodrose is. He serves as the guide for the rest of the party. 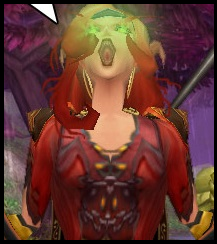 "Now I have the power!!"
Class: Warlock

A blood elf warlock, and a fairly ditzy one. She appears shortly after the introduction of Bun'kar, and the Shadow Priest immediately starts hitting on her and immediately denies that is what he is doing. 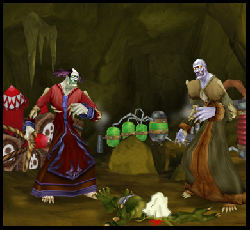 "What kind of sick freak bludgeons a man to death with a hanky!?"
~The Senior PSI Investigator

A duo of detectives, who are part of the PSI "pween scene investigation" group. In their debut episode, the subordinate detective is referred to as McKenzie, while the head detective remains unnamed. They are both undead and follow the trail of dead people left behind by Flintlocke and his party. While McKenzie always seems to pin down the exact cause of death and deduce Flintlocke's unorthodox methods, his leader will inevitably dismiss his conclusion offhand and instead claim that the victim instead died by some bizarre suicide ritual or other farfetched method. As time goes by and Flintlocke's gang leaves more and more corpses, their theories get stranger and stranger. 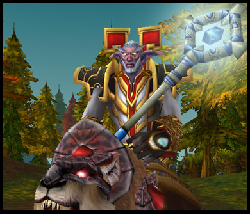 "Too easy. Nerf everything."
Class: Priest

The most renowned player there is, his skill is legendary, even Bloodrose considers that he is hardcore and that he makes her look like Doc. He terrorizes game designers who fear what he may post negatively on their forums about their new games, and has been a level 60 priest since the very first day that the World of Warcraft servers went up. His reputation is such that he always shows up saying "BEHOLD!" and gets away with making up new words that everyone else start using right away.