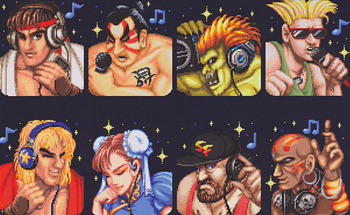 open/close all folders
Street Fighter
Let's appropriately begin with the game that started it all, shall we?
Street Fighter Alpha
Street Fighter III
Words can't do enough to describe Street Fighter III's library of sound, but we can say that it put the "Street" in "Street Fighter". For New Generation and 2nd Impact, a vibrant mix of jazz, hip hop, and 1960s throwbacks; with Third Strike, a truly legit lexicon of hip-hop, drum n' bass sample throwing turntable expertise with all sorts of genres of music, and Vancouver rap talent Infinite on the mic to let the people know what the word on the street is in the world of fighting.