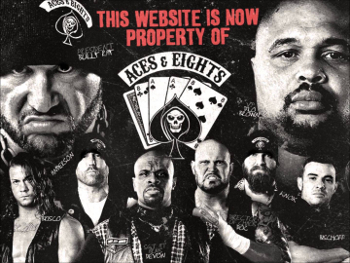 Everybody fears the Aces & Eights…
The Aces & Eights were an outlaw motorcycle gang featured in Total Nonstop Action Wrestling, which debuted in 2012.
Advertisement:

On the first night of the 2012 Bound for Glory series, recently inducted TNA Hall of Famer Sting was jumped during his Impact acceptance speech by a group of masked thugs. Shortly thereafter, then-current General Manager Hulk Hogan was sent a package with a Dead Man's Hand inside and a note promising that they would see him soon. The group backed up that promise, attacking both Hogan and Sting the week after sending it; the attack on Hogan in particular caused him to be put out for a few weeks.

The gang would take advantage of this time to wreak havoc on both faces and heels, resulting in the TNA roster in general forming an Enemy Mine to take them down. This did little to stop them, as they continued taking out TNA wrestlers, interfering in the BFG series, and creating havoc by timing their attacks to create speculation as to who The Mole in its midst was. Eventually the gang was able, via kidnapping, to get Hogan and Sting to give them a match at Bound for Glory, with the stipulation being they would either get unfettered access to the Impact Zone or be forced to leave forever. Bully Ray volunteered his services to aid Hogan and Sting in their struggle, but while Sting agreed that they needed a big bad bully, Hogan never trusted him, instead choosing Mr. Anderson—that is, until the gang decided to take him out, leaving Hogan with no other choice but to trust Bully.

At Bound for Glory, Sting and Bully lost in a tables match to the Aces & Eights when numerous members interfered, one even driving Bully through a table. In the post-match brawl that ensued, said member would be revealed in a truly shocking twist to be none other than Bully Ray's own brother and former tag team partner, Devon.

With Devon, identified as the group's Sgt. at Arms, becoming their main on-air spokesperson, the Aces & Eights continued to run amok over TNA. Meanwhile, amidst his role alongside Hulk Hogan and Sting in the vanguard to stop the Aces & Eights, Bully Ray eventually became close with Hulk's daughter Brooke, as discovered by disgruntled former World Heavyweight Champion Austin Aries. Initially this created strife between Bully and Hulk Hogan which led to Hogan suspending Bully; however his persistence in helping fight the Aces & Eights as well as protect Brooke in the process led Hogan to change his mind and eventually warm up to Bully. Ray would ingratiate himself to the Hogans, becoming Brooke's fiancé and Hulk's most trusted hand.

Meanwhile, the Aces & Eights' plans continued to progress. The key members of the club would eventually be unmasked, revealing themselves to be Mike Knox (soon rechristened "Knux"), the former Luke Gallows (now known as "DOC", short for "Director of Chaos"), Garett Bischoff and Wes Brisco (manipulating Kurt Angle as his protégés for several months), and wrestler-turned-road-agent D'Lo Brown as the group's VP. They also had local models convince Mr. Anderson to join the club, and color commentator Taz reveal his status in the gang to lead a gang ambush from them during Bully and Brooke's wedding.

Come Lockdown, Brooke convinced Hogan to award Bully Ray the #1 contender's spot ahead of eight competitors who auditioned for the role in a series of matches, while Sting commanded a team of wrestlers wronged by the Aces & Eights to fight them at Lethal Lockdown and Kurt Angle fought Wes Brisco. Brown helped Brisco beat Angle, however the rest of the Aces came out on the losing end of Lethal Lockdown. Still they returned for the world title main event, cornering both Bully Ray and World Champion Jeff Hardy…only for Devon to toss Bully Ray his ballpeen hammer, which Bully then used to attack Hardy, stealing the World Heavyweight Championship and revealing himself to be the President of the Club.

Some emotional knife twisting for the Hogans and Arc Welding to explain each element of his master plan later, Bully and his crew asserted their dominance over the TNA roster, attacking wrestlers more brazenly than ever. However, Hogan, Sting, and the roster's desire for revenge became the driving force behind the challenges to Bully's title, namely coming from Jeff Hardy and Sting. Following his failure to win the championship, Sting decided to recreate the Main Event Mafia to counteract the Aces & Eights. The Mafia was able to neutralize the Aces & Eights and help Chris Sabin, who traded in his X-Division title for a shot at the World Champion, defeat Bully for the title. Taking back the championship a few weeks later, Bully revealed that he'd enlisted the aid of MMA fighter Tito Ortiz as his enforcer (betraying close friend and Main Event Mafia member Rampage Jackson in the process), as well as entered a secret tryst with Brooke…Tessmacher, who was then added to the club.

In time, a seeming hemorrhage of TNA roster cuts would lead to several members' exodus, such as D'Lo Brown being kicked out of the club for being weak early on, Devon being forced to leave after being pinned by surprise participant AJ Styles in a 10-man Aces-Mafia tag match, DOC turning in his kutte after losing the replacement VP bid to Anderson, Anderson being taken out for insubordination after questioning Bully's decisions and challenging him for the title, and Brisco being taken out for failing Bully one too many times. Heading into his Bound for Glory title defense against 2013 BFG Series winner AJ Styles, the club was reduced to Bully, Garett, Knux, and Taz. Despite their interference and AJ's own issues with TNA President Dixie Carter, Styles defeated Bully for the Championship, then beat him in a rematch to retain the title.

Mr. Anderson soon returned to TNA, wanting revenge against Bully for his violent exodus from the club (repeating the cycle from two years ago with Immortal). Originally this excluded his former brethren, as he hoped to appeal to them to leave the club as it had become too restrictive and Bully-centric. But when they used this to set a trap for him, he abandoned this mercy and extended his Roaring Rampage of Revenge to taking everyone out en route to a Career vs. Club match against Bully. Anderson won, disbanding the Aces & Eights forever.

More details (if necessary) can be found at The Other Wiki

"These are the tropes that will dominate TNA!":