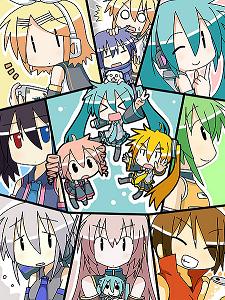 Those Two Guys on top just can't catch a break.
"I'm in love with its unique cuteness!"

Chibi Miku-san is what you get when you cross Vocaloid with Azumanga Daioh (Or any Moe-themed 4koma for that matter). Chibi Miku-san is a webcomic that narrates the humorous everyday life of Chibi-Miku and the rest of the Crypton Vocaloid gang in a series of silent, often non sequitur strips. Illustrated by a Japanese artist named Minami, it used to be a gag-per-day webcomic series until recently, where new strips are released erratically (which can range from once every few days to a whole month). Though it is not the first Vocaloid 4koma series nor the most original, it is arguably the longest-running out there with a small but dedicated fanbase.

Known for its inconsistent character designs, being disgustingly adorable and easy to understand despite the lack of dialogue (thus enjoyed by both Japanese and English speaking fans alike). Can be found in Minami's 'site here

and his PIXIV page. A Danbooru archive with translation notes can also be found here