Film / The Howling
aka: Howling VI The Freaks 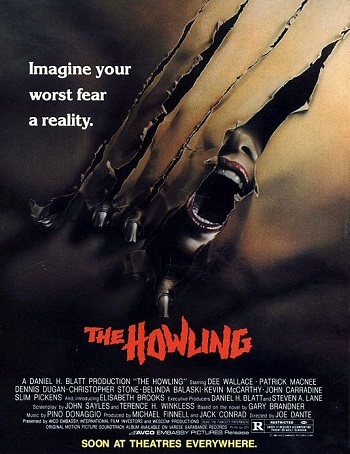 After a bizarre and near-fatal encounter with serial killer Eddie "The Mangler" Quist (Robert Picardo), television anchorwoman Karen White (Dee Wallace) is left traumatized and in dire need of a rest. Her psychiatrist Dr. George Waggner (Patrick Macnee) sends her and her husband Bill (Christopher Stone) to The Colony, a rural retreat where select patients go to relax and participate in group therapy. However, Karen notices that The Colony appears to be populated by a number of odd characters, which together with the remote location and the strange howling she hears at night soon lead Karen to believe that something is very wrong here. When she starts looking into The Colony's affairs, the apparent resurrection of Eddie Quist soon proves to be the least of her problems...

The Howling was followed by seven sequels, the most recent in 2011. A remake of the original is in early planning stages for Netflix. It's, as of this writing, planned to directed by Andy Muschietti, the director of the It duology.

open/close all folders
The Howling