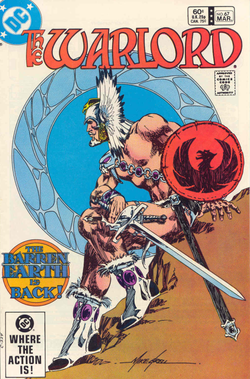 In the savage world of Skartaris, life is a constant struggle for survival. Here, beneath an unblinking orb of eternal sunlight, one simple law prevails: If you let down your guard for an instant you will soon be very dead.
Advertisement:

The Warlord is a sword and sorcery comic book published by DC Comics. The series and eponymous character debuted in 1st Issue Special #8 (November 1975), and was created by Mike Grell. The Warlord was first published in 1976 and ran until 1989 for a total of 133 issues and six annuals. There was also a 6-issue miniseries in 1992 written by Grell.

Vietnam veteran SR-71 pilot Travis Morgan passed through a hole in the earth's crust while flying over the north pole and landed in the underground world of Skartaris, a place strongly reminiscent of Edgar Rice Burroughs's Pellucidar. There Travis, wielding his .44 AutoMag pistol and joined by scantily-dressed female barbarian Tara, became the Warlord and fought villains such as the evil sorcerer Deimos as well as various kings. He gained various sidekicks such as Machiste, Shakira, a Russian scientist named Mariah and his magic-wielding daughter Jennifer Morgan. In one story arc Morgan even becomes the U.S. President in the far future (Issue 84).

A new Warlord series was launched in 2006, produced by writer Bruce Jones and artist Bart Sears. This series restarted the concept and started with Travis Morgan arriving in Skartaris and was canceled after 10 issues. The series left a number of story points unanswered as issue nine finished on a cliff-hanger, while issue #10 had a standalone story set sometime in the future. This relaunch has been largely ignored throughout the DC continuity.

In March 2008, Grell stated that he was working on a proposal to DC for a new Warlord series. It was announced in July 2008 that Warlord would be returning as an ongoing series written by Mike Grell in time for the 35th anniversary. The series started in April 2009, drawn by Joe Prado.

This was also the setting for an episode of Justice League Unlimited, "Chaos At The Center Of The Earth!"

Not to be confused with the 1965 film The War Lord with Charlton Heston.