The faculty members of the Academy who teach various classes, preside over clubs and extracurricular activities, and/or are employed by the school for other, miscellaneous duties. This section deals with character directly involved with the main branch, or the school, of the DWMA in Death City, Nevada. For other workers affiliated with the organization but not exactly T the aforesaid location, click "Affiliates" in the disambiguation above.

Remember: Tropes applying to Canon Characters should come from the story. For canon information and tropes, please see here.

Beware of unmarked spoilers. This page is still under considerable construction.

Artwork Note: All artwork and illustrations of the Original Characters and other such original concepts have been retrieved from here

with express permission also given here

. Credit is given to the proper people.

Lord Death
The God of Death and Order, and the leader and founder of Death Weapon Meister Academy. He is highly respected by everyone below him but is hated by all of his enemies. Lord Death is suspicious of the influx of Evil Humans and Kishin Eggs at the beginning of the story, especially since they seemed to be stronger and more dangerous than ever. Nonetheless, as he is stuck in Death City, he does his best to encourage his followers to keep fighting.

Professor Franken Stein
Mad Scientist extraordinaire. Franken Stein is known far and wide as the best meister to ever graduate from the Academy. He still harbors his uncanny love for dissection. He is the current homeroom teacher of Class Crescent Moon. He also is the head of the Medical Club and has a Health class.
Professor Gregory Matilda
The 41-year-old homeroom teacher of the Half Moon Class and godfather of Meredith and Luther. He apparently bears a grudge toward Professor Stein and Class Crescent Moon for presently unknown reasons.
Noel Isaac Ricardsen 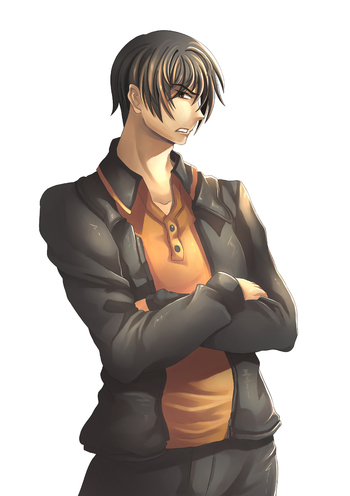 "For today, let me give you something to think about. Oftentimes, we listen to what people say and see what they do to gather an impression of them. But, there is actually a better way. In battle, when warriors clash, this exchange of blows, slashes, or whatever can invisibly tell a lot about each other – their fighting style, their strength, the amount of effort they are putting in. For us Meisters and Weapons, each time we clash with another like ourselves, inputting our soul into everything, we tell even more. If you concentrate, through a single battle, you can learn so much about the other person."

In Soul Eater: Troubled Souls, Noel debuts as the 42-year-old father of Tsuji and Rowena Ricardsen and the husband of Rosalind. Noel Isaac Ricardsen is the currently employed as the DWMA's head disciplinarian as well as the homeroom teacher for the Correctional Class. He has an older brother named Edward. Three years prior, in Chicago, he stopped and offered aid to Marcellus and Nayumi and began training his children after the four decided to partner up and join the Academy

Note: Unless it’s related or expounds upon something in Troubled Souls, please keep all Soul Eater Zeta tropes and information about Noel here.

Sidney ‘Sid’ Barett & Mira Nygus
Yojimbo Mifune
Mifune is the guardian the child witch Angela Leon. He is a legendary samurai with the title of “Sword God.” He was beaten by Black☆Star during the Baba Yaga Castle invasion and left Arachnophobia for the Academy, taking Angela with him. Now, he is a teacher at the organization and heads the Swordsmanship Club.
Kathi Rumeri 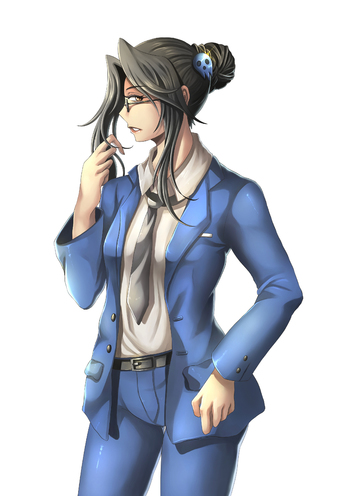 “Tell me something. Do you have any regrets? Insecurities? Anything like that? [...] No matter who you are, you’re going to fail at something sooner or later, badly or otherwise. It’s what you do afterwards that defines you. [...] How do you plan on dealing with adversity? Are you going to let it ruin your life, make you despair, or are you going to fight and keep hope in your heart?”

A middle-aged woman (37, to be exact) who acts as another librarian to the Academy’s Library. She also runs the Book Club and coaches Tennis. She is retired from active duty in the DWMA but became a Three-Star Meister during her tenure. According to herself, she has gone through many twists and turns during her service time. Despite her mannerisms and temperament, Kathi is probably one of the wisest individuals in the setting, not unlike Noel.