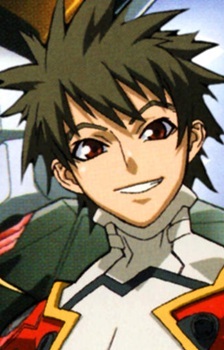 Our main protagonist and actually The Lancer of the team, Eiji is a hot-tempered school boy who is looking for his missing sister Ayaka, only to find himself recruited into the Earthgertz as one of the Gran Knights of Sandman. He ends up being the 'voice of reason' to the clueless main pilot Touga, due to them being boys. 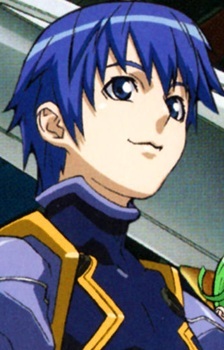 The main pilot of Gravion, Touga has been raised since childhood for the job, handpicked from his original orphanage by Sandman himself. He lived a sheltered life, therefore came off as naive and clueless on many things, but he had a good heart. 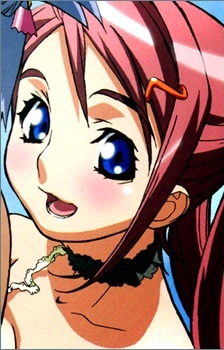 One of the two pilots of G-Driller that eventually forms up the arm. Luna is an energetic Okinawan girl that came to Sandman's group while looking for her missing father, which turned out to be one of the identities of Raven. 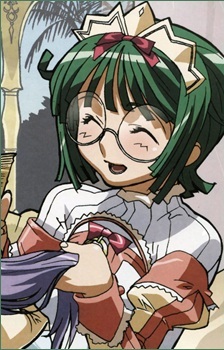 One of Sandman's many-many maid and also another pilots of the G-Driller. Ena is more or less reluctant about battles, but did her best to maintain between fighting Zeravire and taking care of the castle. She's actually a prototype version of the machines that formed up the Gravion (Gran Divas), built in 50 years by Sandman. After committing a Heroic Sacrifice, she was put back in her original body and rejoined as if nothing happened. 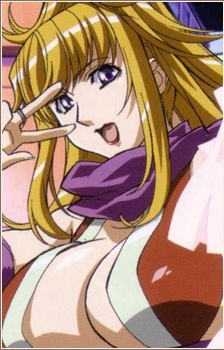 The token adult of the Gran Knights, Mizuki is an incredibly busty lady, a skilled hacker and overall reasonable individual who was a friend of Eiji's sister Ayaka and was also looking for her, though she likes to get knocked on beer. She's the pilot of G-Striker, forming one of the legs.

Or so it seems. Mizuki is actually a spy of the EFA, leaking the development info of Gravion so the Federation could catch up technology-wise, which led to the creation of Gran Troopers. She's not too pleased with her boss' aim for upgrade to be more or less one-upping Gravion out of pride, instead of combining their strength together, which disgusted her post retirement and made her return to the Gran Knights. 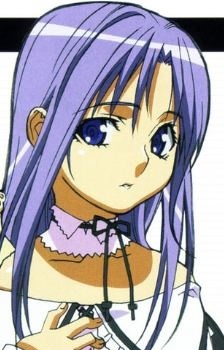 A shy young girl that was holed up in one of the towers in Sandman's castle, with them being close and she had a pet ferret named Lolotte. Leele is the pilot of G-Shadow, a stealth plane that could turn into a boomerang and formed up Gravion's chest. Her parents died in a fire, and thus she has a fear towards fires... especially blue ones... Hm?

Turns out, that's not what her origin was like. Leele is actually the daughter of Zieg Zeravire AKA Sandman. The destruction of her planet in blue flames horrified her so much that she lost her memories and afterwards she was put on a stasis capsule and sent to a capsule, but arrived in a latter time after the arrival of Sandman. Afterwards, she had to fabricate a new past, such as being Sandman's niece... until her past came knocking. 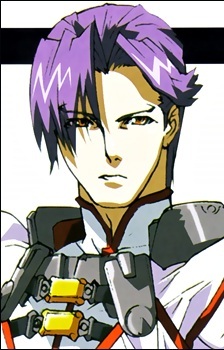 The main benefactor of the Gran Knights/Earthgertz, a stylish, charming and shrewd billionaire businessman, owning his own private St. Germain's castle. Sandman is Leele's uncle and Eiji suspect that he has something to do with the disappearance of his sister Ayaka. He forms the Gran Knights and gives permission to their main weapon, the huge robot Gravion due to predicting the invasion of the Zeravire, and that only Gravion stood a chance against them.

And that's because he was one of the designers of the mech and accidentally created the Zeravire. Sandman is actually Zieg Zeravire, one of the chief scientists of planet Llambias. With his planet facing peril, he and his brother Hugi created a countermeasure that would be known as the Genocidron, and later the Zeravire. However, knowing the danger it presented, Zieg ended up opposed to the idea and tried to offer another solution, but that fell onto deaf ears and to prevent Hugi to go on with his more diabolical plans with the Genocidron, Zieg wrestled control of them, causing it to go berserk, kill Hugi and destroy his planet. With his creation, now known as the Zeravire, let loose, Zieg wandered the galaxy and arrived to Earth, bidding his time to create a countermeasure in case the Zeravire come to Earth, while taking the identity of Klein Sandman. 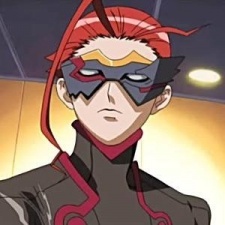 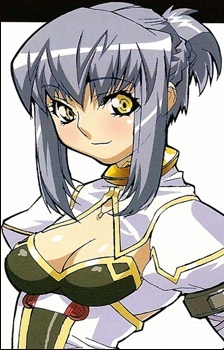