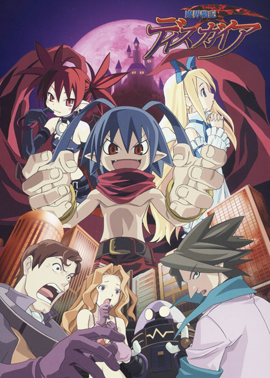 The anime adaptation of Disgaea: Hour of Darkness. See the trailer here.

The series opens as Angel Trainee Flonne descends into the Netherworld in front of a burning castle in the middle of a lake of lava, having been sent to assassinate the Overlord. Skip to two years later, she still hasn't found him, and heads into what she believes is a tomb to take shelter. Here, she falls through the floor and discovers herself in a garbage heap — why it's there is never explained, but she forgets all about it after spotting a coffin with the Overlord's crest on it. Hoping she may have found her target at last; she cracks it open, only to be disappointed that it contains a young demon, not her target. Introducing himself as Prince Laharl, he is startled to discover his current resting place and that it's been two years since he went for a nap. After some... misunderstandings, he is reunited with his father's former vassal Etna and her personal squad of Prinnies. Accompanied by Flonne, who doesn't think she can go back seeing as how her target actually choked to death shortly before she arrived in the Netherworld in the first place and wants to see if demons are truly as evil as they claim to be, the trio (and the Prinnies) set out for the Overlord's Castle, seeking to place Laharl back on the throne that is rightfully his.

After finally getting the throne back, a new problem pops up when a giant space fleet arrives from Earth's dimension, seeking to lay waste to the Netherworld and conquer it. Laharl, not one to put up with this sort of thing, puts an end to their plans and discovers they were manipulated into it by Vulcanus, of Celestia. Hijacking their flagship for added insult to injury, he pilots it off to Celestia to show them what he thinks of this.