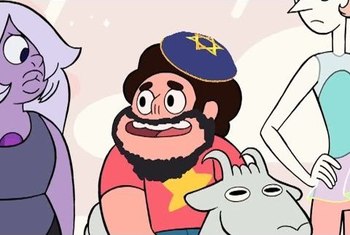 I'd really wanna be
A Jew...
A short film about a boy and his universe.
—A brief description from the first video
Advertisement:

While not at all the first Steven Universe YouTube Poop to be made, it's definitely one of the first to become popular.

is a YTP created by KroboProductions and uploaded on April 1, 2015.

There's... not much to say what it's about except that for most of the video's run, it is a retelling of "Giant Woman" with a few changes here and there to hilarious results thanks to the creator's (in)famous near-seamless sentence-mixing.

was uploaded on May 5, 2015, and is just as crazy as ever but with a less linear plot. Not that the first one really had a story to begin with, but it only encompassed one episode.

was uploaded on March 31, 2016, which somehow topped the craziness of the former installment.