Recap / The Order of the Stick: Blood Runs in the Family 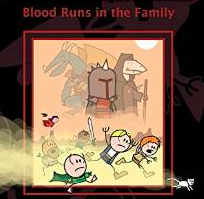 Reformed, the Order of the Stick go to Girard's Gate. However, the Western Continent it's hidden on is a tense, unstable place, where the rulership of the many territories frequently changes hands. What's more, the pasts of several Order members, both distant and recent, choose that time to return.