Recap / The Order of the Stick: Don't Split the Party 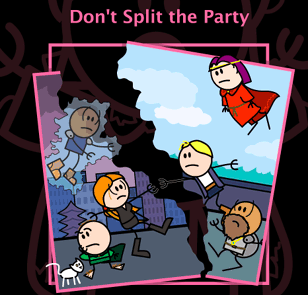 Following the battle for Azure City, the Order find themselves separated; Roy's dead, and his body is with Haley and Belkar in Azure city, while Elan, Durkon and Vaarsuvius are all at sea with the Azurite Refugees. As each of them try to cope, Vaarsuvius ends up in serious trouble, and is forced to make a decision that will change everything...