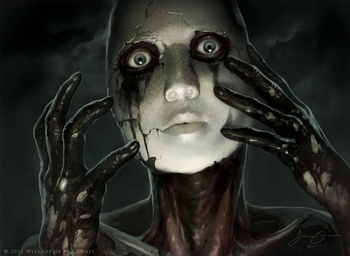 All Will Be One.
Advertisement:

From a plane which is Gothic Horror personified, to a race of Eldritch Abominations that threaten to corrupt and erase whole planets, to The Virus that assimilates its victims via Body Horror, as well as having some of the most graphic and grotesque card art in trading card game history, to say that The Multiverse doesn't have its fair share of Nightmare Fuel would be a lie.