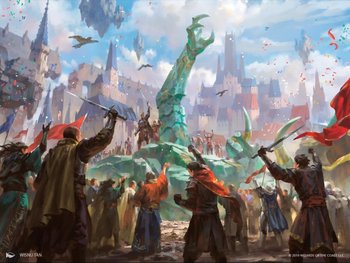 Bolas cared little when his statue fell, thinking it a useful distraction, underestimating the surge of resolve it gave his opponents.
Advertisement:

Guilds of Ravnica Blocknote Not an official block since Wizards moved to the "three-and-one model" for expansions, but since they're all part of the same storyline and set on the same plane, the Guilds of Ravnica, Ravnica Allegiance, and War of the Spark expansions are unofficially considered a block.

Phyrexia - All Will Be One

Tournaments and Play
Magic: The Gathering tournaments, especially the Pro Tour, are a source of many epic events.