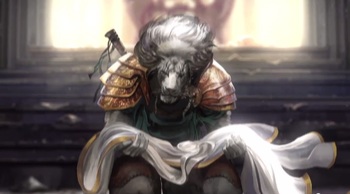 His face was a mask of pain; his body seemed rigid with shock.
Advertisement:

As The Multiverse is vast and filled with Loads and Loads of Characters, it is expected that some planes and some iconic characters will be met with tragic fates.