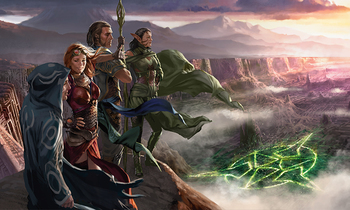 "I've heard it said that a Planeswalker is someone who can always run from danger. But Gideon's right: we're also the ones who can choose to stay."
Advertisement:

Despite the Nightmare Fuel that the planes often have, Magic: The Gathering proves time and time again that it is A World Half Full.