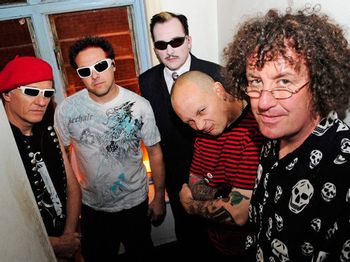 Ladies and gentlemen, how do?

The Damned are one of the original British punk bands, although they have mutated beyond punk rock in the decades since they were first formed in 1976. The original line-up consisted of Dave Vanian (Vocals), Brian James (Guitar), Captain Sensible (Bass), and Rat Scabies (Drums). They released both the first British punk single ("New Rose") and British punk album (Damned Damned Damned) before becoming the first British punk band to tour The United States. Interestingly enough they were not the first British punk band to break up (that was the Sex Pistols; The Damned were second) but they were the first to re-form. The subsequent line up had Captain Sensible replacing the departed Brian James on guitar and whatever bassist they could find note Henry Badowski, Motörhead's Lemmy (!), Algy Ward, Paul Gray, Bryn Merrick, Jason Harris, The Sisters of Mercy's Patricia Morrison, and Stu West that week replacing the Captain on the bottom section. It was during this period that the band — which thanks to their vampyric crooning frontman Vanian had always dabbled in the dark — began to take on a more gothic sound, which helped give birth to the Gothic Rock subgenre.

The band broke up again in the early nineties but re-formed (again) in time for the new millennium and are still performing and occasionally releasing music. In November 2012, the band were awarded the Classic Rock Outstanding Contribution Award for services to Rock music, possibly the first award they ever got in their long career. In 2015 they were the subject of Wes Orshoski's documentary The Damned: Don't You Wish That We Were Dead.

Discography Of The Damned:

Albums of The Damned:

Singles of The Damned:

Compilations of The Damned:

Tropes of The Damned: