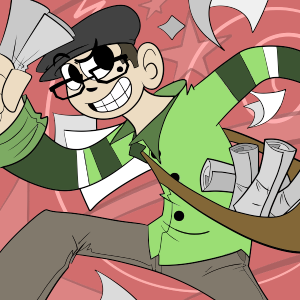 (real name Tanner) is a Canadian Let's Player on YouTube. He's known for his off-the-wall commentaries, knowledge of way too much pop-culture and general randomness.

He has also made other videos other then his Lets Plays, such as "Pokémon Misguided Adventures", which tells the storyline of Pokémon Red and Blue from a humorous perspective. Since they were made before he became the proficient editor he is today, he doesn't speak of them much. He is also a member of The Sonic Show along with Fuad

His Let's Plays provide examples of

Hello there! My name is Professor Oak and welcome to the world of Pokemon! Ah, now, are you a boy or a girl?
—-