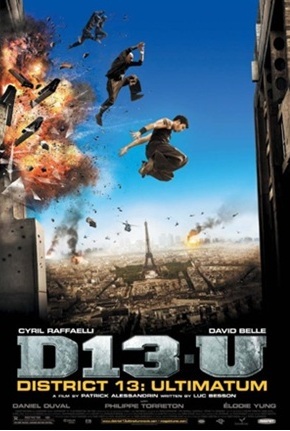 Banlieue 13: Ultimatum is the 2009 sequel to District 13. David Belle and Cyrus Raffaeli both return as Leito and Damien, respectively.

Three years after the death of Taha, the power vacuum left by the collapse of his criminal empire has created a gang war between the five most powerful remaining gangs in the district. Leito and Damien soon discover a government conspiracy involving gentrification by evacuating the district to level the blocks.

The sequel provides examples of;