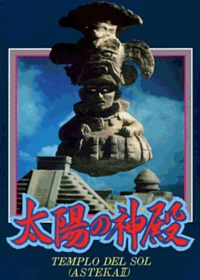 Taiyō no Shinden Asteka II, also known as Asteka II: Templo del Sol, is a first/third person graphical Adventure Game, developed by Falcom in 1986 note or maybe 1987; sources are not consistent about the year, for the PC88, PC98, and MSX2 platforms, and was later ported to the Famicom (in 1988), Sega Saturn (in 1998), and Microsoft Windows (in 1999). It puts the player in the role of an archaeologist exploring the ruins of the Mayan city Chichén Itzá (on the Yucatán Peninsula).

Whereas its predecessor Asteka was essentially a Text Adventure (it had static pictures for areas in the game, but was still controlled by a Text Parser), this game is instead menu-driven. It closely resembles ICOM's adventure games (Déjà Vu, Uninvited, and Shadowgate), but differs in two major ways. First, choosing objects to interact with is not done with a mouse pointer, but rather you "cycle through" all objects on the screen (and therefore you never need to hunt pixels). Second, it includes an overhead-view map (or "overworld") for travelling from one building to another (when you enter a building, it shifts to first-person mode).

The Famicom/NES port deserves special mention, for two reasons. First, it was the only one to receive an English-language localization; this version was titled Tombs & Treasure, released in 1991 by Infocomnote This "Infocom" was Infocom In Name Only; it was really Activision using the Infocom trademark, the original Infocom company having been disbanded two years earlier.. Second, Compile, who developed this port, made some major changes to the game; in particular, expanding upon the story (which was almost non-existent in the original), adding more characters, and adding some minor RPG Elements. The backstory now involves a previous expedition to Chichén Itzá, led by Professor Imes, in which most of the group disappeared, and your mission is to find them. Also, whereas the original game had only an Featureless Protagonist, here you play as a party of three characters: a man (whose name is chosen by the player, and there is no default name), Professor Imes's daughter (this character also does not have a canonical name), and José the guide. Each of the latter two characters has an ability that must be used in order to progress past certain obstacles; specifically, the daughter can play musical instruments, and José can move heavy objects. The RPG Elements consist of a few enemies that you encounter (there's a fixed number of them, each one is unique, and each one appears at a single specific location), a Turn-Based Combat system for fighting the enemies, and an Experience Points system (these points are rewarded both for defeating enemies and for making progress through the adventure-game puzzles).