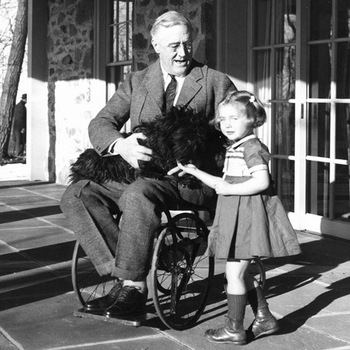 FDR in one of the few pictures of him in his wheelchair. Doesn't make him any less awesome.
"The country needs and, unless I mistake its temper, the country demands bold, persistent experimentation. It is common sense to take a method and try it: If it fails, admit it frankly and try another. But above all, try something."
— Franklin D. Roosevelt, Oglethorpe University commencement address, 1932
Advertisement:

Franklin Delano Roosevelt (January 30, 1882 – April 12, 1945), often referred to by his initials of FDR, was the 32nd President of the United States. The tenth president from the Democratic Party, he was also the longest-tenured president in American history, serving three full terms and being just over a month into a fourth at the time of his death. Roosevelt was president from 1933 to 1945, succeeding Herbert Hoover, and was followed by his Vice President, Harry S. Truman, who completed FDR's fourth term after his death in office. No prior president had even won a third term, and no president since has challenged—or will be able to challenge, thanks to the 22nd Amendment—his length of service (barring the very unlikely event of said amendment being repealed).

Roosevelt led the country through The Great Depression and World War II, and his domestic reforms and foreign policy accomplishments have forever changed the United States. By the end of his life, the United States of America had become the premier world superpower, a position it maintains to this very day, and his policies in peace and war played no small part in bringing out that transformation. As a liberal, his presidency is credited to starting a shift in American politics, taking the Democratic Party to a more progressive left-wing direction, and in the process beginning a polarization that led to the Republican Party and the Democratic Party taking their modern positions.

Roosevelt is, to date, the only physically-disabled President.note (though John F. Kennedy was nearly there, having a hormonal disorder called Addison's disease, likely caused by an underlying lifelong autoimmune disorder, that left him weak, and a debilitating back injury that he got playing football in college and then exacerbated in the Navy). While FDR was susceptible to a lot of illnesses, likely including his paralytic one, due to being an isolated only child, pre-paralysis he was far healthier than JFK, who'd had numerous hospitalizations and brushes with death by about the same age. Kennedy also took scrupulous care to hide his medical issues from the public, projecting an image of health and "vigor". The "bad back" was about all he admitted. In the summer of 1921, he became gravely ill a few weeks after he took his sons to the annual Boy Scout jamboree. He was diagnosed with polio but is now believed to have had Guillain–Barré syndrome

, due to his symptoms and the circumstances in which he got it. It took him until the end of the year to recover, but he remained permanently paralyzed from the waist down. He did his best to keep the extent of his illness secret from the public, insisting on being photographed from the waist up (to hide his wheelchair), standing with the surreptitious assistance of aides at public functions, and using his truly impressive upper body strength to hold himself upright at podiums. He was even able to walk short distances through the use of leg braces and canes.note He'd also occasionally stand between aides and use them and his own strength to hold himself up while swinging his hips to move his legs and give the impression that he was walking under his own power.

He was also a fierce Slave to PR, taking good care on how he presented himself to the public, and cultivating friendships with the press corps (who, whether on account of Code of Honor or because they bought into his platform, refrained from making his disability into an issue). Nonetheless, the fact that he was wheelchair bound was more or less an

Open Secret, with more than a few leaks to the public, and yet either because of the scale of The Great Depression, the lack of 24/7 News coverage in the pre-television era or his personal popularity, this never quite mattered to either him, the public or his political opponents. In fact, his partial debilitation had silver linings: he was facing serious political scandal about undercover Military Police agents entrapping homosexuals in the Navy through oral sex and no one wanted to then press too hard to a person so seriously ill. More importantly, Franklin developed considerable empathy for people enduring misfortune through no fault of their own (albeit with occasional blindspotsnote Such as not supporting Federal anti-lynching bills because he felt there was not enough political support when he had to get broader legislation passed, giving in to wartime racist hysteria and setting up internment for Japanese-Americans and not doing nearly enough to specifically interfere with The Holocaust), a quality which would be sorely needed during the global hardships he would face as president. The fact that his wife, Eleanor, was a staunch activist for the underdog proved a major influence on him as well, even if his continual philandering with other women was an irritant that permanently cooled their marriage. (Both Roosevelts, by the way, were related to earlier US president Theodore Roosevelt; Eleanor as his niece, Franklin as his fifth cousin.)

To further his goals, Roosevelt revolutionized the office's communication with the public with the aid of technology. Most famously, instead of the typical bellowing speeches given to a mass audience before microphones, he would have a series of more conversational radio addresses that he called "Fireside Chats". With that relatively soft-spoken approach, Roosevelt proved capable of winning over many to his policies, such as his first one that persuaded much of the public to take money they were hoarding under their mattresses after the wave of bank failures to put it back into those financial institutions after the national "banking holiday" which banks were closed for days to allow for sufficient funds and organizational reforms to be put in place to restore confidence in them.

Roosevelt is often considered one of the greatest American presidents, usually ranked right up there with George Washington and Abraham Lincoln, though he's criticized for his internment of Japanese Americans (yes, American citizens) and his attempt to pack the Supreme Court. It also helps that he served twice as long as other presidents, ensuring that when WWII rolled around and finally ended the Great Depression, he would get plenty of credit, and also that despite his unprecedented winning streak with the Electoral College he intended to retire at the end of the war, before that "terrific pain in the back of [his] head" forced him out about a month earlier than he had planned. He remains not only the only sitting US president to die of retirony, but also the only sitting president other than Lincoln to become an indirect casualty of war; as the United News newsreel "Japan Surrenders" put it later that year, "Years of brave responsibility took their toll. A grateful world honors him today."