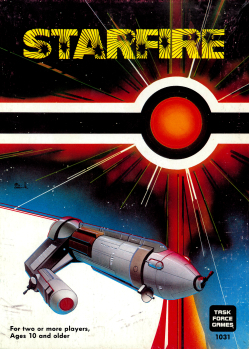 "For an instant, the decades rolled away and it was the time of the Second Interstellar War, when Commander Nikolai Borisovich Antonov, his Operations officer, had learned of the birth of a son on the eve of the Second Battle of Ophiuchi Junction. They'd all had a little more to drink that night than they should have, but Nikolai had survived both the vodka and the battle. And toward the end of the Third Interstellar War, President Anderson had met Vice Admiral Antonov's newly commissioned son . . . who now sat across from Minister of War Production Anderson, tossing back his vodka so much like Nikolasha that for an instant it seemed . . . Too many memories. We are not meant to live so long."
— Howard Anderson, Crusade
Advertisement:

Starfire is a hex-map-based wargame, focused on combat between fleets of space ships.

Building ships and fighting between individual ships was originally designed to be almost painfully simple, so that the players could focus on fleet tactics. As the game evolved, however, the rules grew more complex, until players needed to keep track of almost as much information per ship as in Star Fleet Battles. (Which, coincidentally, was originally written by the same author).

The game is now in its fifth edition.Of particular interest is the fact that David Weber, author of the Honor Harrington series of SF novels, became a contributor to the game starting with the Starfire III: Empires supplement of the 1st Edition. Some of Weber's online comments about the game, and his involvement with it, can be found here

(the black text on that page is an expandable link container). Weber later teamed up with Steve White to write novels set in the Starfire universe, of which 8 have been published so far:

Not to be confused with the DC Comics character, Starfire. Also bears no relation to the 1980 coin-op Arcade Game Star Fire

, or to the nuclear fusion process that powers actual stars.

This wargame provides examples of:

Their role had suddenly narrowed to inflicting as many enemy casualties as possible before their own unavoidable cessation of existence.