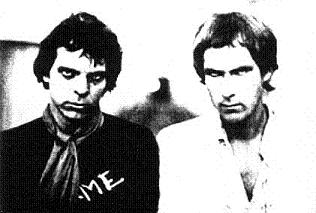 Chrome are an influential Industrial Post-Punk/Avant-garde band from San Francisco. The band, founded in 1975 by the late mastermind Damon Edge (born Thomas Wisse) and recurring bassist Gary Spain, initially played Psychedelic, experimental rock music described by some as "Brian Eno meets Santana". However in 1976, following the addition of effects-overloaded guitar-god Helios Creed (born Barry Johnson), the band began taking in Punk influences and developed into the Industrial Acid Punk for which they are known. Their 1979 album, Half Machine Lip Moves, is widely considered their defining statement.

The band split following the 3rd From the Sun and Raining Milk albums, after which Edge would continue to use the band name and release more synth-based (and heavily derided) works until his death in 1995. Then in 1997 Helios Creed, who had been experiencing a prolific solo career since 1985, took the Chrome name back and returned it to its noisy Rock roots. The Helios-fronted band has sporadically recorded and performed ever since.

The band's recordings through 1982's 3rd From the Sun were instrumental to the development of Industrial Rock, and the band were directly influential to the likes of Cabaret Voltaire, Butthole Surfers, The Jesus Lizard, My Bloody Valentine, Nine Inch Nails, Prong, and Psychic TV.

The band's latest album, Techromancy, was released in 2017. Previously Helios led a successful campaign to buy back unreleased '79-'80 material and put it onto disc