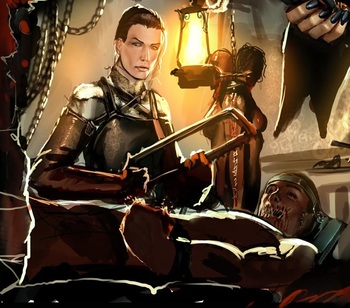 "Sometimes true evil does take flesh and walk the Earth."
Ian O'Conner: The Dolmen Emerald. The Source of "Tir Na Nog." The Realm of Eternal Youth. As long as I possess the talisman, I shall never die.
Lara Croft: A shame those poor souls you tortured to death must pay the prize for your immortality. The talisman curses them, doesn't it? Makes them eternal prisoners of this castle?
...
Ian: The talisman draws power from torment and death. The greater the agony of the death, the more power the talisman absorbs...As long as I live, I don't believe I'll ever grow tired of this.
—Tomb Raider: The Series, #44, "Tower of Souls, part 2"

Even in a bleak world full of murderers and rapists, a select few individuals in this Shared Universe manage to stand out.

Other Top Cow comics, i.e. those which don't use Shared Universe characters, can be found here.