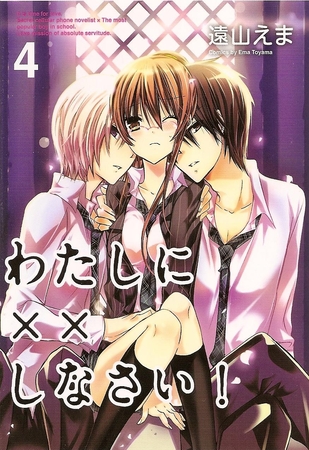 "Fall in love with me!"
—Yukina Himuro
Advertisement:

Missions of Love (Watashi ni XX Shinasai!) is a manga series by Ema Toyama, which was serialized in Nakayoshi from 2009 to 2015 and compiled into 19 volumes.

It revolves around Yukina Himuro, nicknamed "The Snow Woman" and feared by everyone in her school—except her cousin Akira Shimotsuki—for her glaring eyes and cold skin.

Unknowingly to them, Yukina is really the famous cell phone novelist Yupina. However, as Yukina learns that her readers want more "love" in her story, Yukina decides to personally experience love in order to write a good novel.

Her target is Shigure Kitami—a nice bishounen adored by both students and teachers, but secretly gets girls to like him as a fun pass time. Yukina blackmails him into doing love "missions" with her to experience love.

Has been licensed in English by Kodansha USA. A one-volume continuation named Couples Arc came out in 2018.