Values Dissonance
aka: Once Acceptable Targets 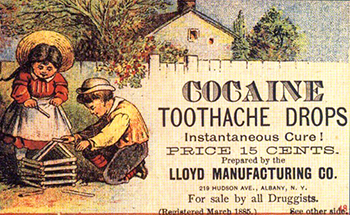 Next to the bottles of Cocaine-Kola soda pop.

"The past is a foreign country: they do things differently there."
— L.P. Hartley, The Go-Between
Advertisement:

Tropes are common denominators. Their viewers recognize them, laugh at them or groan at them, but most of us can guess where they're coming from—specifically, what cultural values are embodied in the trope.

Unfortunately, some tropes just don't travel — or age — very well. They're fine on their home turf, where everyone understands them and knows what value system they're based on. When that trope makes the trip to another country, however, it gets seasick on the way over, arriving at port looking distinctly disheveled and finding itself among strangers who have no idea what it's talking about.

Since there are so many countries (193 UN members and 2 observers to be exact, and that's just counting those that have international recognition) and cultures in the world, it's not surprising that there are so many different outlooks on life — what's important, who's important, what constitutes justice and what qualifies as cruelty changes depending on where you are. Even in countries that speak the same language, values can be different. The UK and the USA, for example, share a language and are regarded as culturally similar to one another... but handguns are legal in the USA, whereas they are mostly banned for civilians in the UK. The UK also has no death penalty, while the US does for federal offenses and offenses against about half the states. This leads to some fundamental differences in the way the legal system is perceived, even between two countries that are alike in many other ways.

Sometimes, the difference is even closer to home. A show where the death penalty for a criminal is a good ending in a state that accepts such a measure may not be as accepted as such in a state that frowns on execution. With the multicultural nature of many places, sometimes a trope only has to go down the street to become completely unrecognizable. Differing religions, backgrounds or life experiences can mean that a person's view of a trope differs from the "standard" that said trope is derived from.

Other tropes find it difficult to age gracefully. The world being the dynamic and evolving place that it is, some aspects of the media don't quite manage to keep pace with the time and become the "Grumpy Old Men" of Tropeland.

Very often, the trope in question is An Aesop, and exporting it, or viewing it twenty years later than the time it was created, gives unfavorable results.

See also Unfortunate Implications and Discredited Trope. Also see Germans Love David Hasselhoff, in which it's critical acclaim rather than moral values that is on the line. Also see Fair for Its Day, in which the work actually has less values dissonance than its contemporaries. See Culture Clash and Innocent Bigot for when this happens in-story and Deliberate Values Dissonance for when the author is doing it on purpose. Please list that trope instead of invoking this trope on any works that do so. Also see Have a Gay Old Time and Get Thee to a Nunnery, where dialogue is interpreted differently due to this. Has similarity to Good Flaws, Bad Flaws. Also see The Generation Gap, which is a subtrope encompassing differing values among generations (for instance, between the World War II and Baby Boomer generations). Blue-and-Orange Morality is this trope exaggerated. Contrast Values Resonance. Can sometimes result in Misplaced Nationalism. And of course, it's likely to result in the exclamation, Dude, Not Funny!

An example of Values Dissonance between the United Kingdom and the US would be the use of blackface imagery, which formed the centrepiece of The BBC's Black and White Minstrel Show until 1978, with live performances continuing all the way until 1989. Blackface was/is also used in other countries, such as Japan, The BENELUX, and Australia, where it does not have the same cultural stigma or even origin.

WARNING: By its nature, this trope is highly controversial. You may well encounter a custom or belief on this page that you don't think is dissonant at all; you might even be inclined to vehemently defend it. Indeed, concepts of right or wrong or even of what is "proper" are rarely universal in the truest sense of the word. Across every period of Earth's history, just about anything has been or can potentially be justified, or at least rationalized. So if you see a value here you don't find dissonant at all, please refrain from adding your own interpretation. (However, you're welcome to contest it if you don't see how it would be dissonant to anyone, although even then, please edit with civility as usual.)

Note: Examples regarding the dissonance between time periods require a 20-year waiting period before they can be added.