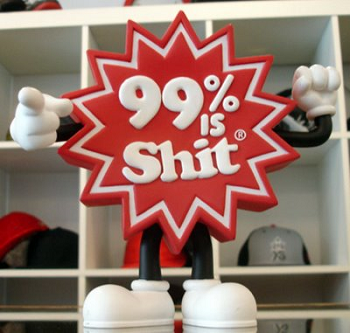 It's important to note that there's a bit of a spectrum of pessimism with respect to Sturgeon's Law. The most optimistic end of the spectrum admits that 90% of everything is crap, but posits that the remaining 10% is absolutely worth it. As one writer put it, "flipping through FanFiction.Net is like flipping through hell with an occasional slice of the heavenly cheesecake thrown in." The most pessimistic end of the spectrum posits that Sturgeon's Law is a baseline; in other words, at least 90% of everything is crap, and the percentage could be as high as 95%, 98%, or 99.99%. The other side of the pessimism is the idea that the various filters (nostalgia, import, publication) aren't actually working, that 90% of all published work is crap, and the percentage of all works that are not crap is closer to one in a million.